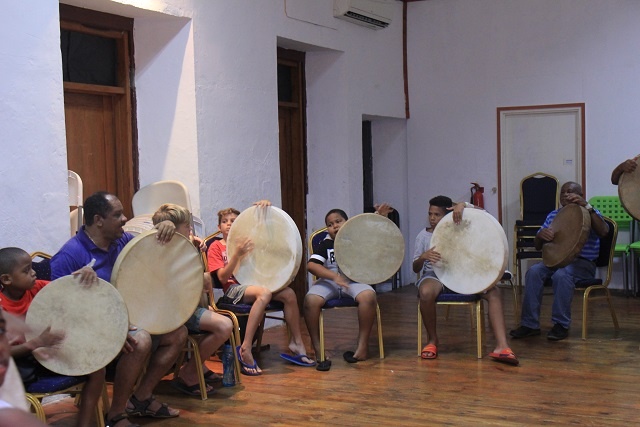 The workshop is all about practical where participants get to learn how to beat the drums. (Salifa Karapetyan, Seychelles News Agency)

(Seychelles News Agency) - Renewing interest in Seychelles’ traditional drum is the aim of a holiday programme launched this week by the National Conservatoire of Performing Arts. Pierre Joseph, director of the Conservatoire, said that the workshops are necessary as there is little interest in the Moutya drum.

“We have decided to open these sessions for both adults and children so that they can learn about drumming in general but we are putting emphasis on the traditional tambour Moutya,” said Joseph.

Joseph said that such workshops are vital as drumming is the base for the island nation music and the Creole culture. During the one week session held at Theatre des Palms in the central district of Mont Fleuri, the participants are also learning how to prepare the drum before it is ready for drumming.

“They will be lighting the fire and heating the drums until it is ready for drumming, as it is usually done especially for Moutya,” explained Joseph. Moutya is a style of traditional music that originated in the slavery period. It is played on large flat drums made from goatskin. There are three different types of drums of different dimensions.

Chad Cedras is an instructor for percussion at the School of Music of the Conservatoire. Cedras is leading the session alongside other well-known local drummers.“This session is to bring the younger generation to appreciate our traditional music. They will have the chance to be sensitised about the traditional musical instruments as well as familiarizing themselves with those,” said Cedras.

The instructor further explained that “even though we have classes all through the year to teach different musical instruments, we feel it is important to reinforce on traditional music.” According to Cedras while the classes also teach musical notes, the workshop is all about practical where participants get to learn how to beat the drums.

Seychellois veteran singer John Wirtz, one of the facilitators of the session, told SNA on Tuesday that he is impressed with the children’s ability and quick learning during the programme. “They are very eager and interested to learn about drumming. I am surprised at how fast they have learned and I must say they are very good at it. Some beat the tambour Moutya better than I do and I have been performing for over 50 years!”he  said.

Wirtz and his band Les Boys have been active in Seychelles – a group of 115 islands in the western Indian Ocean - since the 1960s. Wirtz has been performing solo for decades now and he said there is a strong need to keep alive the islands rich Creole music.

“Such initiative is needed, we have a group that is both interested and talented. I hope they keep the interest and they are also supported,” said Wirtz. The musician adds that he feels that the cost of the Moutya drums which have to be imported from Mauritius where they are made can be a factor that may cause the group to lose interest. “I hope that they can be assisted in that way because even though if we give all these sessions, and they are interested if they do not have the instrument then this will all be in vain,” said Wirtz.

However, Cedras said that the School of Music is taking all the necessary steps to ensure the group remains interested. “What we are thinking of doing is to form a band, as we have both children and adults in the session,” explained Cedras. The band, according to Cedras, will go around and perform in all districts. “This will not only be a form of entertainment, but it will help to create awareness, educate and sensitise all Seychellois on the need to not only learn but protect and conserve our traditional music,” concluded Cedras.

There have been renewed efforts, to create interest in in the island nation’s dying traditional Creole music. Earlier this year, renowned Seychellois artist Patrick Victor started to promote the Creole culture and islands’ traditional music by teaching the younger generation. Victor started to give Moutya drum lessons to young boys and girls in four primary schools.

Arts & Culture » Be a reporter: Write and send your article » Subscribe for news alert
Tags: School of Music, National Conservatoire of Performing Arts