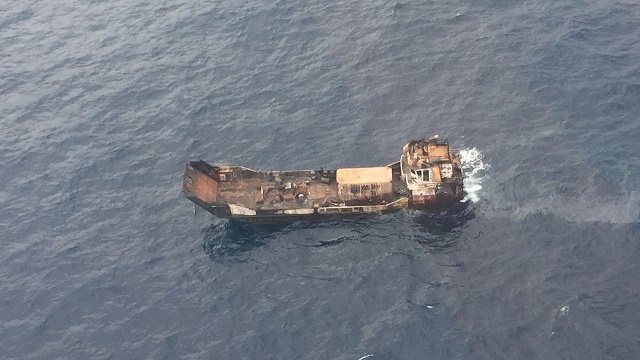 Sea Horse, a cargo vessel of the IDC, was carrying provisions including fuel for the Prison Services on Coetivy. (IDC)

The four men went missing after the boat they were on caught fire in the early hours of Sunday morning. A fifth man was rescued in the sea shortly after the blaze started on board the vessel Sea Horse, anchored 200 metres off Coëtivy Island.

Sea Horse - a cargo vessel of the Islands Development Company (IDC) - was carrying provisions including fuel for the Prison Services on the island. Since 2013, the prison has been running a rehabilitation programme for drug convicts on Coëtivy.

Coëtivy Island is a small coral island in the Seychelles 290 km south of Mahé – the main island. Along with Île Platte, the nearest neighbour 171 km northwest, it comprises the southern coral group and therefore belongs to the Outer Islands of Seychelles -- a group of 115 islands in the western Indian Ocean.

The chief executive of the Islands Development Company, Glenny Savy, said that the company has joined forces with the Seychelles Coast Guard and the Seychelles Maritime Safety Administration.

“The IDC plane, as well as a military plane, have been searching the areas around Coëtivy Island. In addition, three boats from the island are also helping in the search,” said Savy.

In addition, Savy said a medical team from the company, comprising of nurses and doctors, are on the island as part of the rescue operation.

A team including Savy and other personnel from IDC was on Coëtivy as of Monday morning to assess the situation following the incident on board Sea Horse. During the night there has been no new development. The Coast Guard vessel Topaz started its search at 8 am Monday.

“Staff from Coëtivy are also undertaking beach patrols while aircraft are also continuing with the search,” said Savy.

The Sea Horse, a landing craft, was anchored close to the island since Friday evening as it was waiting for high tide to offload its cargo. According to Savy information received said that the fire started on the cargo deck of the vessel.

The vessel is reported to be drifting and the authorities have alerted other ships in the vicinity of the incident.

The director general of the Seychelles Maritime Safety Administration, Joachim Valmont, said that it was too early to say what had caused the fire. “We cannot at this point in time say what happened. We are just gathering information through different reports made. But we have started the investigation to know the exact cause of the fire,” said Valmont.

Valmont added that an official from the Marine Accident Investigation Board is also on the island to start the inquiry.

The Islands Development Company has not released the name of the four missing men but has said through a communique that all family members have been informed.