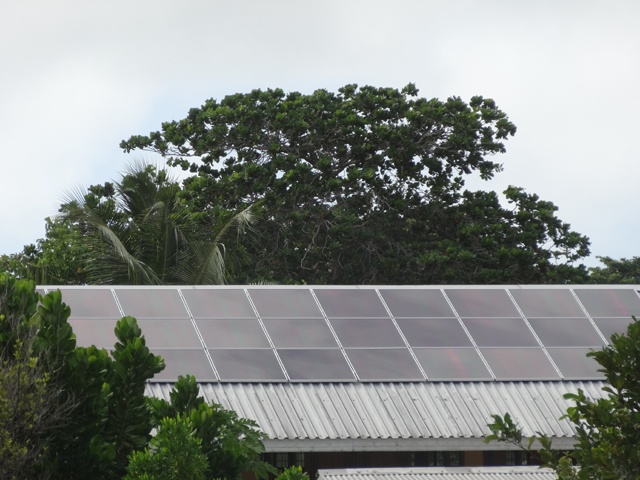 (Seychelles News Agency) - Seven hundred Seychellois families identified as vulnerable are receiving free photovoltaic panels to help them lower their electricity consumption, a project made possible through a grant from the Indian government.

The households identified are those already being assisted by the Agency for Social Protection, which is responsible for providing comprehensive social security services and social relief against vulnerability in Seychelles.

The chief executive of the Public Utilities Corporation (PUC), Philippe Morin, explained during a press conference on Wednesday that even though 700 households will benefit from the project, to start with, photovoltaic systems will be installed at housing estates as well as at individual houses.

“We have started the project for the democratisation of the photovoltaic systems.  PV panels are to be installed on the rooftops of households benefiting from welfare assistance. This is part of a wider project to help lower-income families on welfare to lower their electricity consumption. The project consists of installing solar photovoltaic systems with varying capacities at several locations on Mahe, Praslin and La Digue,” said Morin.

Morin explained that the installations will produce an aggregate capacity of 1.9 megawatts of electricity. “The plan is for all the electricity produced through this project to be offset against the electricity consumption of families on welfare,” added Morin.

Apart from 94 units of 3 kilowatts capacity to be installed on rooftops of individual homes, others will be installed at the Barbarons Emergency Housing. These include units of 1.3kWp, 2kWp and 3kWp.

Marcus Simeon, the chief executive of the Agency for Social Protection, said that “the households being considered for the panels are families having difficulties to pay their utility bills, senior citizens living alone as well as people living with disability and who are not employed. We have pre-identified these people who are already receiving benefits and whom we want to assist without giving them more money.”

Simeon added that not only government and social housing projects will benefit from the project, but there are also privately owned homes as well.

“All households being assisted are those where people are in employment except for senior citizens and people with disability. This is another way of assisting these families who are struggling instead of giving them money which sometimes is not spend correctly,” said Simeon.

Once the solar panels are installed, a household is expected to make a saving of around $35 each month. The government project is being implemented through a $3.4 million grant from the Indian government while the Public Utilities Corporation is facilitating its implementation.

Approximately 700 households will benefit under this project, either by having a rooftop PV installed on their homes or by having a share of the energy produced from the collective PV systems.

Other components of the project include the installation of panels on government buildings on the three main islands of Mahe, Praslin and La Digue. A one-megawatt solar farm will be installed on the manmade island of Romainville which already has five wind turbines.

Laurent Sam, the energy engineer at the Public Utilities Company, said that “staff from the utilities' company will be visiting all selected households in the coming weeks to complete the formalities.”

Sam explained that the project will be done in phases “we will start with the emergency houses at Barbarons, then we will work on the 94 individual houses – the size of each unit for each house will depend on the number of rooms. And then we will start work at the solar farm at Romainville.”

The contract for the installation has been awarded to SEFTECH, an Indian company whose experts are already in the country. Materials for the farm and other units have already been shipped and are expected to arrive in the island nation in September. The installation works will begin soon after.