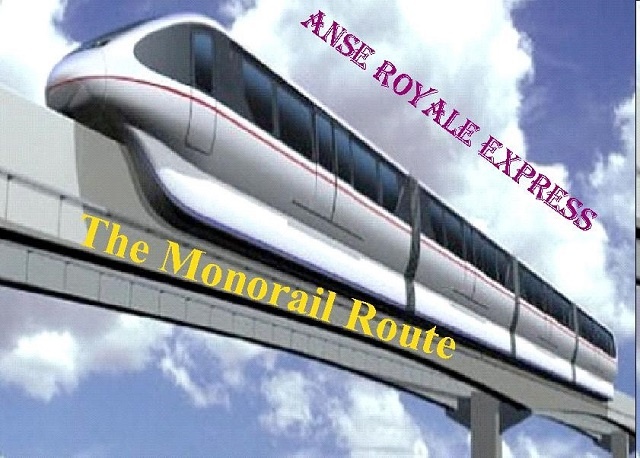 The Anse Royale Express, as the monorail system is called, would run on Mahe from Anse Royale in the south through to Anse Etoile in the north. (Barry Laine)

(Seychelles News Agency) - Reducing traffic congestion, pollution and fuel use, as well as creating an alternative emergency route, would be some of the benefits of a monorail system in Seychelles, said a local entrepreneur who is seeking support for his plan.

A monorail is a single rail serving as a track for passenger or freight vehicles, usually elevated above the ground. The Anse Royale Express, as the monorail system planned for Seychelles is called, would run from Anse Royale, a southern district of the main island of Mahe, through to Anse Etoile, a northern district.

Talking about his project, Barry Laine, the chairperson of Anse Royale Express, told SNA that there are many benefits brought about by the construction of such a transport system.

“The monorail was designed to let the train take the strain from our congested roads. For example, if you live next to the airport and you take the monorail, you will be leaving your car at home, reducing the number of cars on the road,” said Laine.

The chief executive of the Seychelles Planning Authority, Joseph Francois, agrees that a monorail reduces pressure on traffic as “it brings a lot of people from point A to point B fairly fast.”

“Monorails do no use the same road as other vehicles as most of them are on pillars. However, the government has concerns when it came to the aesthetic impact of the project,” said Francois.

A detailed concept of the project, including designs and an environmental impact assessment, is yet to be handed over to the relevant ministry, added Francois.

Estimated to cost around $6 million, the project would make its profit not from fares but from advertising revenues. This will be in the form of billboards along the railway line and advert spaces at the entrance of stations and in the train carriages. Income will also come through the renting of offices above the stations and services such as postal and courier packages and small freights from Airport to Victoria.

This will provide the person or company who invests in the monorail a return on their investment.

Laine explained that with sufficient parking areas around the stations of the monorail, the ‘Park and Ride’ concept can be adopted. Depending on the distance expected to be travelled, ticket fares vary between $0.7 and $1.1 (SCR10 and SCR15).

A feasibility study that was carried out in 2009 showed that with all services centred in Victoria, the capital of Seychelles, the monorail was not going to be a tourist attraction. It would focus on getting people to work and back home.

“The level of pollution that vehicles create every morning and evening is sufficient to choke the fish stock in our ocean. There is now proof that oil pollutants in the air which contain mercury find their way into our ocean when it rains and fish accumulates this mercury which is later passed to humans when consumed,” said Laine.

Laine also said that the system will provide the main island of Seychelles -- a 115-island archipelago in the western Indian Ocean -- with an emergency route should a tsunami hit the island.

“The monorail will be the only evacuation system because it will be independently powered by its own generators and solar panels, running at 4 meters above the ground. Everything is Seychelles is sea level - power stations, all our food stock, our banks, our water system,” elaborated Laine.

Seven out of eight stations have been earmarked and agreed upon, except for the one to be located in Victoria, where the site proposed is not ideal for Anse Royale Express. Laine proposes that the bus station and monorail station are combined, with the rail system running at first-floor level.

“We can raise the money, that is not the problem. The main challenge is the government agreeing and understanding the aim behind the monorail,” said Laine.

Commenting on the government’s plan to build a tunnel between Cascade, an eastern Mahe district, and Grand Anse on the western side, Laine said that “a tunnel will bring more traffic faster and double the amount.”

“Including the monorail within the tunnel will allow people to leave their vehicle, travel by monorail and land in Victoria faster. We need to go all the way for once,” said Laine.

Consumers in Seychelles refunded nearly $ 100,000 because of faulty work, products

2nd community with yacht marina to be built in Seychelles

Pedestrian-friendly waterfront project for Seychellois to begin next year

Seychelles to regulate vendors on the beaches of La Digue island