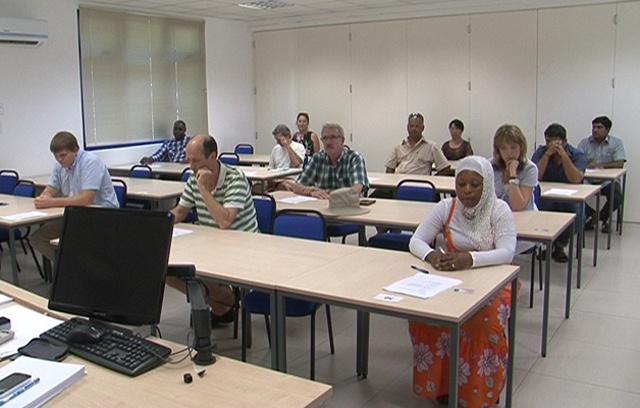 (Seychelles News Agency) - Twenty one applicants aspiring to be citizens of the Seychelles islands who sat for an examination on the islands’ culture, history, constitution and politics, in the first such exercise in the islands last week, have obtained their results.

Sixteen have scored the required 80 percent or more while five others have failed, meaning a 76 percent pass rate.

The exams, part of new measures introduced following the amendment of the Seychelles’ Citizenship Act in November last year, have been prepared by the five-member Citizenship Eligibility Committee that has been appointed for a three year period to assess the suitability of, and appropriately recommend non-Seychellois applicants who want to become Seychelles

Confirming the results to SNA this morning, the Chairperson of the Committee, Charles Bastienne noted that that out of the sixteen who passed the exams, three scored 100 percent while the lowest score amongst the five who failed was 60 percent.

Speaking in a report aired by the national television, the Seychelles Broadcasting Corporation (SBC) after the examination last week some of the applicants indicated that they had thought the exam would be more difficult but had found it easy.

According to Bastienne, the committee has observed a tendency whereby those who failed and those who obtained borderline passes failed to get the last questions right suggesting that they felt pressured to rush seeing others had completed the test.

“Next time, whoever sits for the citizenship exam needs to take their time to read the questions properly because the results shows that it may not have been that easy otherwise we would have had more people scoring 90 percent and above and even 100 percent,” said Bastienne adding that the applicants also need to do their research properly based on the pool of questions they are provided with as part of their preparations.

“The reason we gave two hours for the examination is because we took several things into consideration including language barrier, so it is important in the future for them to take their time and not feel pressured when they see that others have finished.”

In order to sit the exam papers which were made available in all three national languages, English, French and Creole, the candidates first had to fulfill the eligibility criteria to apply for citizenship, which includes 10 years of residency in the islands, or being married to a Seychellois for more than 10 years, while there are also special criteria for investors, students and persons who possess extraordinary abilities.

The sixteen candidates who have scored above 80 percent will now have to move to the next step as they seek to obtain Seychelles citizenship which will include being interviewed by the Citizenship Eligibility Committee, who will also consult other documents that the applicants have been asked to provide including their certificate proving that they have passed the exam, before the committee can make recommendations accordingly.

As for the 24 percent of the candidates who failed to pass the test, they are eligible to resit.

Bastienne says the next examination session is planned for the first week of August.

WikiLeaks' Assange arrested in London on US extradition request