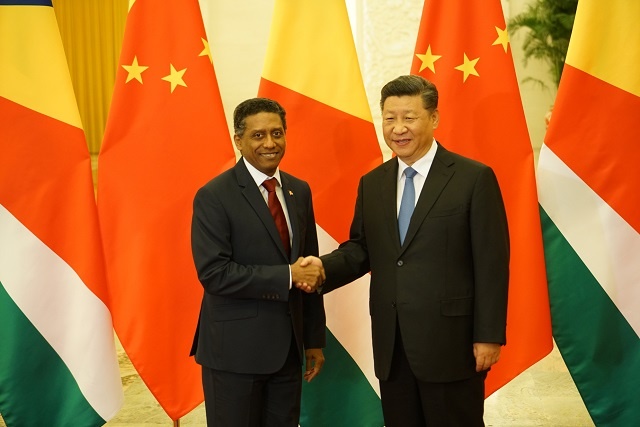 The heads of state of Seychelles and China held bilateral discussions on Saturday. (State House)

(Seychelles News Agency) - Seychelles and China will be opening up trade connectivity, deepening investment and industrial cooperation through two newly signed Memoranda of Understanding (MOU), State House said on Sunday, as the president of the island nation visited the world's most populous country.

Prior to the signing, the heads of state of Seychelles and China held bilateral discussions Saturday in which President Danny Faure of Seychelles thanked China for having been a key partner in the socio-economic and infrastructural development of the island nation.

Faure said that he “looked forward to an excellent working relationship with President Xi Jinping and hoped that his first to China since assuming the presidency would play a key role in elevating the ties between the two countries.”

On his side, President Xi Jinping welcomed Faure and his delegation to Beijing, saying, ‘You are an old friend of the Chinese people, and this bilateral meeting and the FOCAC Summit aims to build an even stronger partnership. I would like to commend you and Seychelles for all that has been achieved, and we are prepared to work with you to elevate our cooperation to new heights.”

The first MOU addresses cooperation between the two countries within the framework of the Silk Road Economic Belt and the 21st Century Maritime Silk Road Initiative. This will aim, State House said, at promoting socio-economic and infrastructural development between China and Seychelles, a group of 115 islands in the western Indian Ocean.

The Belt and Road Initiative is a development strategy launched by the Chinese government with the intention of promoting economic cooperation among countries along the proposed Belt and Road routes. The initiative aims to connect Asia, Europe and Africa along five routes while the 21st Century Maritime Silk Road, focusses on using Chinese coastal ports.

Seychelles and China will also be cooperating in the marine sector through a ‘Blue Partnership’. The agreement will establish closer relations between ocean-related agencies in the two countries, State House said. It is also expected to improve the understanding of the ocean and climate change and strengthen marine environmental protection and integrated marine management.

After the meeting on Saturday, the two Presidents witnessed the signing of the agreement on economic and technical cooperation between Seychelles and China. The agreement provides for a new grant of $7.5 million to implement projects in Seychelles which will be mutually agreed by the two governments.

The Seychelles’ President is still in China where he is attending the 2018 Beijing summit of the Forum on China-Africa Cooperation (FOCAC) from September 3-4 at the invitation of the President Xi Jinping.

The summit is being held under the theme ‘China and Africa: toward an even stronger community with a shared future through win-win cooperation.’