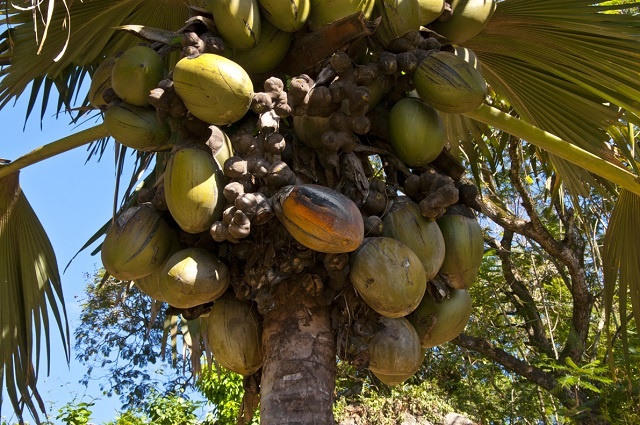 The survey was done on the islands of Seychelles where there are coco de mer trees. (Gerard Larose, Seychelles Tourism Board)

(Seychelles News Agency) - Local authorities in Seychelles are now in a better position to make amendments to the coco de mer decree following the completion of a national census of the endemic species. The census undertaken by Seychelles' Ministry of Environment is to allow better management and ensure the survival of the coco de mer – oversized nuts endemic to the island nation.

The director general for biodiversity conservation and management, Marie-May Muzungaile, said with the updated data the ministry can now review the coco de mer management decree.

“We are now better informed and will relook at procedures, how relevant they still are. Maybe relook at the policies as well for the vision we have for our coco de mer. But we will need a proper legal framework which will allow to achieve this new vision. So this will be a comprehensive exercise," Muzungaile said.

The survey was done on the islands of Seychelles – an archipelago in the western Indian Ocean – where there are coco de mer trees. These included the three main islands -- Mahe, Praslin and La Digue -- as well as Fregate, North Island, Felicite, and Silhouette. The survey covered all government and private properties where coco de mer trees grow.

The Lodoicea, commonly known as the coco de mer, or double coconut, is endemic to the Seychelles islands. The largest forest of the coco de mer is found on Praslin, at the Vallee de Mai – a UNESCO world heritage site.

“We now know that we have around 8,000 trees, which is pretty healthy. We now have the GPS coordinates as well. Now this information can be put on a map for an overview of the total number of nuts per tree and their exact distributions per locations,” said Muzungaille.

The data collected includes information received from the staff of the Vallee de Mai, Fond Boffay and Fond Ferdinand – three sites on Praslin where the nuts grow naturally. The information about juveniles, males, and females, those with mature and premature nuts will be provided to stakeholders to ensure the continued conservation and protection of the coco de mer.

“We now have a clear idea about the production cycle of the trees. This is very important for us when we are monitoring our enforcement. Because when we know how many mature nuts are available, we will know if there are illegal activities or poaching taking place,” explained the director general.

Muzungaille explained that this will also help the department’s monitoring with producers.  “If for instance a producer is selling 50 nuts and we know that the person did not have this amount of mature coco de mer, then we can keep tabs to see whether these were acquired legally or illegally.”

Another important finding is that now the Ministry has information that can determine where the plantation of coco de mer can be extended.

“We are looking at these areas with such potential because as part of our new policy which came into force last year, we are promoting the replanting of more coco de mer trees. So we are looking at sites, which has the right habitat, that is favourable and is spacious as well,” said Muzungaile.

The census, which was held over three months, was done on all targeted islands except for Curieuse. Curieuse Island is the only island apart from Praslin where the palm grows in its natural state. A protected area, Curieuse is managed by Seychelles National Parks Authority.

The former chief executive of the authority,  Flavien Joubert, told SNA in an interview in March this year, that the island has updated data on the coco de mer which is readily available.

“The GVI (Global Vision International) is currently doing ongoing monitoring of the coco de mer on Curieuse, and we have updated information as well as GPS points. Our data is up to date. Some were updated only last year.”

Joubert said that since 2010, Global Vision International -- a British organisation -- has set up an expedition base on Curieuse. “These volunteers have been complementing our work where conservation is concerned and has helped immensely with the coco de mer monitoring.”