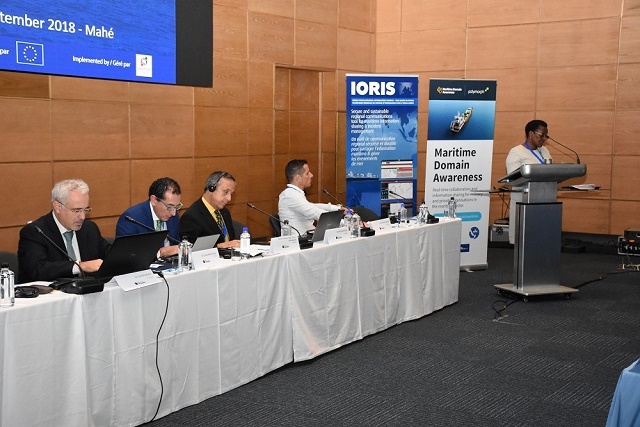 The Indian Ocean Regional Information Sharing and the Incident Management network was launched on Tuesday in Seychelles. (Thomas Meriton)

The Indian Ocean Regional Information Sharing (IORIS) and the Incident Management network was launched on Tuesday at the Eden Bleu Hotel, on the eastern coast of Seychelles' main island.

The component manager for information sharing at EU CRIMARIO, David Nattrass, said that the platform expresses the cooperative approach that has been developed by the EU to “address piracy and new maritime security challenges faced by the Indian Ocean littoral states such as drugs, illegal fishing, and piracy attacks.”

The platform will be managed by Seychelles and Madagascar, the two regional centres designated under the Indian Ocean Commission.

Seychelles, a group of 115 islands in the western Indian Ocean, has a vast Economic Exclusive Zone of 1.37 million square kilometres, which makes it very difficult to detect illegal activities at sea.

The director of the Regional Centre for Operational Coordination in Seychelles, Ronny Matatiken, said that with the different threats faced in the Indian Ocean “we need to have ways to exchange information in a prompt manner and the platform will provide just that.”

He added that “however, we can have modern technology and systems, but if we don’t have people behind it will not be efficient. This is why we had to do conduct training to use it. It is not a perfect system, but we need to entice people to use it in order to identify the loopholes. Hence we want the system to be used beyond the Indian Ocean if it is found to be very successful.”

The Indian Ocean Regional Information Sharing provides functionality for all national and regional maritime centres to communicate regionally, or privately one to one or with selected groups for the exchange of non-classified information in a secure environment.

Nattrass said that EU CRIMARIO is under obligation to transfer full ownership and management of the web to the regional partners by the end of 2019.

“The thinking behind this is that if you have a system that is administered by a country that is outside of the region, they have oversight of all communications taking place within the platform. Instead, we wanted to ensure that it is the regional partners who manage their own information such that they can decide, who, when, where to share the information,” he added.

The need for more collaboration in the region was highlighted during the period where piracy threats were at a peak in the Indian Ocean and 21 states in the region decided to collaborate through the Djibouti Code of conduct agreement in 2009.