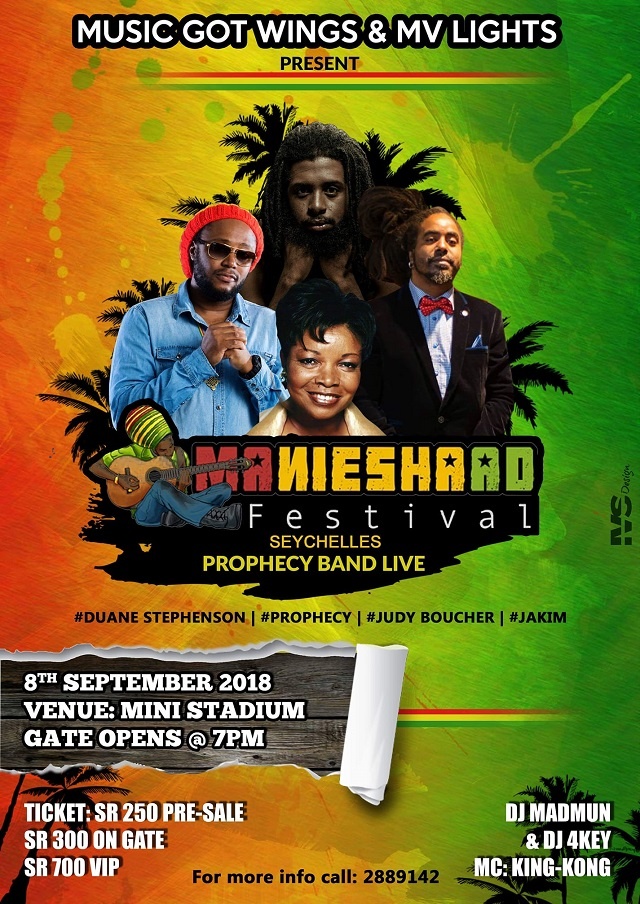 Four artists will be performing in the Manieshaad Festival on Saturday in Victoria.  (Stephen Elijah Eliza, Facebook)

(Seychelles News Agency) - Islanders and visitors in Seychelles will have the chance to enjoy the performance of three international artists hailing from three different islands on Saturday evening in the Manieshaad Festival at the Mini Stadium, Victoria.

Duane Stephenson from Jamaica, Judy Boucher of St Vincent, and Prophecy hailing from Mauritius will entertain the expected large crowd.  Joining them will be local artist Jakim, making it a four-man show.

The organiser of the event, Elijah, said that for the launch of the Manieshaad Festival, he wanted to have four artists perform as the number four represents a solid foundation.

He explained that the name of the festival is a combination of his two sons’ names. Tickets for the festival are on sale at Dara’s Plus in the capital (Ex-Kot Do) at $18 and $51 for a VIP pass. At the gate, which opens at 7 p.m. regular tickets will cost $22.

SNA met with Duane Stephenson and Judy Boucher on Thursday for a chat about the performance on Saturday. (Prophecy and his band were not yet in the country at the time of the interview.)

Stephenson said that he wishes to see people having a great time and enjoying live music.

“I want people to go home with passion and love in their soul. Diversity is the spice in everything and people will be getting different flavours from one genre. If everyone comes with the same energy, vibes and content, you could just have one person instead of three to perform,” Stephenson.

This is the first time that the Jamaican reggae artist is setting foot in Seychelles and he says that the country is “very reminiscent of home, with great food, so it is definitely a place I could easily live in.”

On the other hand, this is the second visit of Boucher to Seychelles, a group of 115 islands in the western Indian Ocean. She performed for the first time in the island nation in February for Valentine’s Day.

“It is amazing to be back and this time I am really excited to be here. I get to see artists that I have never seen before. Never have I thought that I would meet Duane as ‘August Town’ is something I live with all the time,” said Boucher.

She said that during her first performance, she was not expecting such a crowd or to have a big fanbase in the country. 'Can't be with you tonight' and 'You caught my eye' are two songs that Boucher will be performing.

From Stephenson, the public can expect hits such as 'August Town', 'Cottage in Negril' and 'Fool for you'.

“I am introducing some of the less known songs as well, taking people on a musical journey,” he said.

With love resonating in most of the songs of the three artists, Boucher said that there is a great need to express love.

On the same topic, Stephenson said that love is not simply physical but so much more.

“Love yourself first. When you love yourself and learn about yourself, only then can you extend love to another person. Young people should be careful of the physical -think emotional and mental first. The physical will come later and it will be much more organic, much more natural and lasting,” he added.