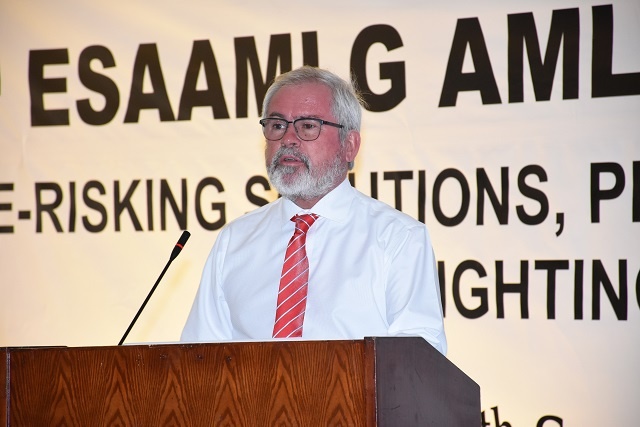 Maurice Loustau-Lalanne said Seychelles will ensure that the organisation continues to play a positive role in the fight against Money Laundering, Financing of Terrorism.  (Joena Meme)

(Seychelles News Agency) - Seychelles assumed the presidency and chairmanship of the Eastern and Southern Africa Anti-Money Laundering Group (ESAAMLG) from Tanzania at the opening of the Council of Ministers meeting on Friday.

The Tanzanian minister of Finance and Planning, Philip Mpango, handed over the presidency to his counterpart in Seychelles, Maurice Loustau-Lalanne, at the meeting which was hosted by the island nation for the first time.

In his inaugural address, Loustau-Lalanne said, “Seychelles will do all it can to ensure that the achievements made under the Tanzania  Presidency are sustained and our organisation continues to play a positive role in the fight against Money Laundering, Financing of Terrorism and Proliferation and all associated financial crimes.”

The purpose of Eastern and Southern Africa Anti-Money Laundering Group launched in Tanzania in August 1999 is to combat money laundering by implementing recommendations from the international policy-making body, Financial Action Task Force (FATF). The effort includes cooperation and capacity building among member nations.

On his side, Mpango -- the Minister of Finance and Planning from Tanzania -- thanked the Seychelles’ government for fostering the agenda of the group.

On the progress made by the group, Mpango said, “I am also pleased to report that another project on Procurement Corruption in the Public Sector and Associated Money Laundering in the ESAAMLG Region” is at an advanced stage and it is expected to be completed by April 2019.”

He added that “success in this work would enable our member countries to take appropriate measures in ensuring that the national systems we develop for combating the crimes of money laundering and terrorist financing comprehensively take into account the specific risks which each of our countries faces.”

The Council of Ministers meeting was followed by the Public-Private Partnership Dialogue organised by the Central Bank of Seychelles.

The open dialogue is designed to help facilitate the development and implementation of robust Anti-Money Laundering and Combating the Financing of Terrorism regimes in the Eastern and Southern Africa Region.

One of the opening topics was the issue of de-risking which refers to financial institutions exiting relationships with and closing the accounts of clients considered high risk.

The governor of the Seychelles Central Bank, Carolina Abel, said that de-risking is having an adverse effect on all member countries.

“Given its threat to financial stability and financial inclusion, discussing on possible solutions to overcome this risk is critical, especially for those of us who are very dependent on the international payment system to effect trade. Seychelles has not been spared, as some of our banks have experienced this phenomenon,” said Abel.

She said that despite the challenges, The Seychelles archipelago in the western Indian Ocean, through Central Bank has remained proactive to mitigate the threat of de-risking.

Another subject that topped the agenda during the discussion was the problem of illicit wildlife trade.

Abel said that like other countries in the region, Seychelles has also been witnessing an increase in poaching and crimes related to the illegal trade of endemic flora and fauna, including some of the endangered species.

According to the Ministry of Environment, Energy and Climate Change since 2017 there have been several reports of people smuggling giant land tortoises and even reptiles out of the country. This includes the Seychelles' giant bronze gecko, which is believed to be sold for thousands of American dollars on the international market.

As the President of the group, Seychelles is responsible for chairing the meetings of the Task Force of Senior Officials and the Council of Ministers for the coming year.