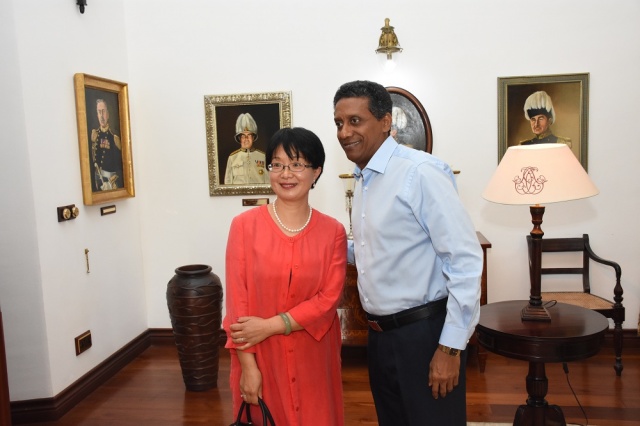 (Seychelles News Agency) - Bilateral relations, especially in the maritime field, between Seychelles and China, has positively progressed over the past two years, said the outgoing Chinese ambassador on Tuesday.

Yu Jinsong made this statement to the press after paying a farewell visit to President Danny Faure at State House, Victoria.

In early September, Faure and his Chinese counterpart, President Xi Jinping, signed two Memoranda of Understanding. The first addressed cooperation between the two countries within the framework of the Silk Road Economic Belt and the 21st Century Maritime Silk Road Initiative. The second aims at improving cooperation within the maritime sector through a ‘Blue Partnership’.

“I am also happy to see the positive progress of the housing project of Corgat and the Seychelles Broadcasting Corporation (SBC) project. I have done my best through the embassy to contribute to the developments done in the interest of the public. That includes the restoration of the Anse Royale attraction park as well as donations made to schools and non-governmental organisations in the country,” said Jinsong.

She added that young Chinese volunteers and medical teams are further proof of the commitment of China to Seychelles, where they have made remarkable performances.

“African countries are good friends of China as well as our partners. We have a traditional friendship for such a long time and hence China does its best to support African countries, including the Seychelles,” she said.

Seychelles, an archipelago in the western Indian Ocean, and China established diplomatic ties in 1976, soon after the 115-island archipelago gained its independence. Tourism, health, defence, education, construction are some of the existing areas of bilateral cooperation between the two countries.

Talking about souvenirs and memories that she will be leaving with, Jinsong said that she will not forget the beauty, stability and peace of the country,

“During the past two years I have had the chance to experience a very important period in the history of Seychelles due to the efforts of all involved parties – the president, the government, the National Assembly as well as the population,” said Jinsong.

The outgoing Chinese ambassador, who presented her credentials to Faure in December 2016, will be leaving Seychelles for Marseille, France.

She said that her successor, who will also be a woman, will take office in one or two months.

“She is a very competent diplomat and I am sure that she will work as hard or harder than I have to promote good relations between the two countries,” said Jinsong.