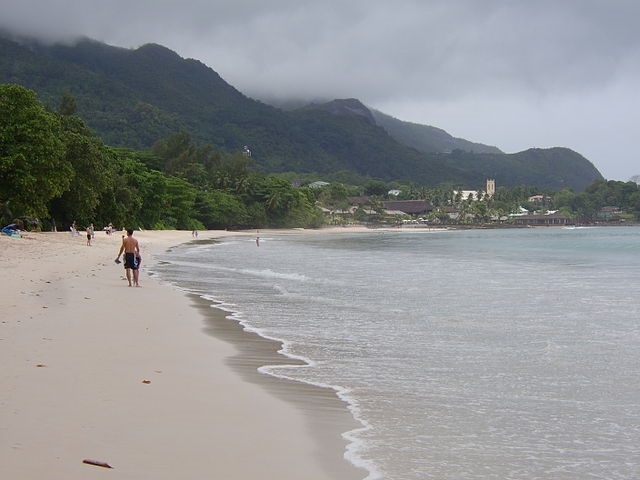 The certification recognises the beach as having been physically cleaned from plastic and other marine debris. (Welcomematt22, Wikipedia) Photo License: CC BY-SA 3.0

(Seychelles News Agency) - Seychelles is the first Small Islands Developing States (SIDS) in the Indian Ocean to be awarded the White Flag certification for having clean seas.

The island nation’ first White Flag was on Saturday put on Beau Vallon beach – a popular beach with visitors - in the north of the main island of Mahe.  The White Flag indicates that the zone is one among the world’s first Certified Safe Marine Areas.

The certification recognises the beach as having been physically cleaned from plastic and other marine debris. Since its launch in Monaco in 2012, White Flag International has become a leading symbol representing clean, plastic-free zones for inhabitants and tourists, as well as the marine life.

Nanette Laure, Director General of the Waste Enforcement and Permit Division in the Ministry of Environment Energy and Climate Change, told SNA on Monday that “Seychelles had to meet the Ocean Alliance Conservation Member’s criteria before certification. “

During the course of last week, representatives from the international group had the opportunity to dive and assess the Beau Vallon bay, to ensure that the area was worthy of the White Flag certification.

“Their experts and divers explored the seas around Beau Vallon beach to ensure that the marine life in the area was healthy and free from waste and plastics,” Laure explained.

The award proved that Seychelles – a group of islands in the western Indian Ocean – is on the right track in protecting and conserving its pristine environment including its seas.

“Our policies, regulations and laws in addition to our enforcement have made it possible for us to attain such recognition,” said Laure.

Seventy-nine beaches across the world have been designated with the White Flag so far.

The flag was presented to President Danny Faure by the President of the Ocean Alliance Conservation Member (OACM), Kristijan Curavic. The island nation is now officially a member of the OACM group. An achievement that expects to increase Seychelles’ global visibility as an environment-friendly country.

The minister for Environment, Wallace Cosgrow, stated that the certification is further testimony to the emphasis placed on environmental protection in Seychelles.

“We have set very ambitious targets for protected area expansion to almost 50 percent of our terrestrial area under the protection of national park status and 30 percent of our Economic Exclusive Zone will be declared marine protected areas by 2020, of which 15 percent will be No-Take Zones,” Cosgrow said.

In recent years the government has introduced several measures to reduce plastic waste and debris. These include initiatives to reduce and reuse PET bottles and aluminium, a ban on importation of single-use plastic bags, Styrofoam boxes and plastic cutleries which came into force last year. A ban on the importation of single-use plastic straws was approved by the government this year and will come into effect in January.

Cosgrow also expressed the government’s appreciation for not for profit organisations which are also complementing government’s efforts in preserving and conserving the environment.

Curavic, president of the OACM and a diver, expressed his surprise at the pristine state of Seychelles’ water, saying that he hopes to use Seychelles as an example to other countries to demonstrate how oceans should be treated.

“The White Flag is preparing one of the biggest global marketing campaigns in the tourism industry and we will like to use Seychelles as an example in the world for others,” Curavic revealed.

On his part, the environment minister said the island nation will need to continue striking the right balance between tourism development and environmental protection through policies. “Protecting our oceans is not only important for our tourism industry but vital for our livelihood and survival,” said Cosgrow.

White Flag international has developed a financing system which allows contributions to countries that are implementing national laws and are committed to environmental protection in the tourism sector. Following its award as a Certified Safe Marine Area (CSMA), Seychelles will now be eligible for financing to develop more sustainable tourism practices.