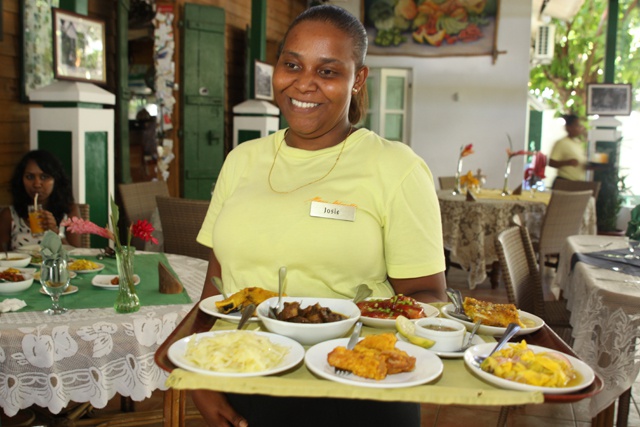 The quality of reviews and opinions received over the past year has earned Marie Antoinette restaurant a Certificate of Excellence in 2014 by TripAdvisor Business website, the second such award following one in 2012 (Joe Laurence, Seychelles News Agency )

(Seychelles News Agency) - Located in a typical colonial house overlooking the Seychelles capital of Victoria, Marie Antoinette Restaurant has been a hit among residents, notably for business lunches, dinners, private parties but also amongst visitors to the islands’ shores for 42 years this year, thanks to its Creole ambience and mouth-watering menu.

This comprises of typical local dishes, such as parrot fish, tuna steak, chicken curry, aubergine fritters and chutneys from golden apple, or other local fruits served with steamed rice.

The menu from Monday to Saturday, is a set one, served buffet style which has not so much changed over the last 40 years.

The quality of reviews and opinions the restaurant has earned over the past year has contributed to Marie Antoinette being awarded a Certificate of Excellence in 2014 by TripAdvisor Business website.

This is the second time the restaurant receives this prestigious award, the first time was in 2012.

“I suspect that Guyto Mondon (manageress) who is the driver behind our success was not pleased in having missed out in 2013 and she spared no effort to ensure that she won this year. As we all know, staying at the top requires consistency, drive, and that little extra all the time,” Roy Fonseka told SNA in an email interview.

Roy is the son of the late Kathleen Fonseka who opened Marie-Antoinette way back in 1972. In other words, the restaurant opened the same year as the opening of the Seychelles International Airport at Pointe Larue, eastern district of the main island of Mahé, which launched these Indian Ocean islands as a tourism destination in a big way.

Kathleen Fonseka born Cosgrow, is a Seychelloise who married a member of Sri Lanka’s Ceylonese forces who remained in Seychelles after World War II, where they had been posted on the main island of Mahé, precisely at Mt Signal and North East Point to help with the defence of the islands against possible Japanese invasion.

“Interestingly, some of the flavours of our Creole cuisine was introduced by my mum who had been to Ceylon and learnt the Sri Lankan cuisine. So what is known as ‘aubergine fritters’ was an original Sri Lankan dish which finds itself being described as ‘Creole’ today,” says Roy.

It was after the passing of his mother that Roy together with lifelong partner Guyto Mondon took over the running of the business.

“Our strategy was to maintain what was very successful, (that is) the set menu which Mrs Fonseka created, and build up on that success in introducing some special add-ons on order, like lobster, fruit-bat curry, octopus, and now a touch of Asian taste with our Sri Lankan chef. In addition to the menu and service, Guyto who is a ‘plant and flower’ fanatic is continuously turning the environment in a botanical creole garden. Little extras like cold towels, good range of wines and making the customer feel at home seals the ‘memorable experience’ of the service,” says Roy.

The eatery is characterised by its colonial style architecture, high roof and wooden staircase, dating back to the 1800s.

In fact the name and architecture was chosen keeping the tradition of the previous owner, who had used it as a bar/dancing hall and called it "Le Grand Trianon".

The fact that this was the name of the lavish palace of Queen Marie-Antoinette of France, shows how grand the building was in those days.

The longest the restaurant has remained closed was from 2004 to 2006 when major renovation was carried out nevertheless maintain the original structure.

It is one of only a dozen edifices in Seychelles which has maintained its original structure and design, despite the major renovation ten years ago and for this reason, was declared a national Monument in 2011.

Marie-Antoinette is also home to the Livingstone Gallery, in honour of the American explorer , Henry Morton Stanley, who stayed there in 1872 and named it" Livingstone Cottage."

The owners believe that having the product is one thing but that conveying the service being provided in a pleasant manner is another which should be of utmost importance.

The ideals seems to be much appreciated by visitors to the restaurant who apart from leaving behind their business cards on the wall dedicated to all who wish to leave something behind have described it as a ‘One stop place to try Creole food’,‘A real Creole dining experience’, ‘A must-try restaurant’, ‘One of the top 10 best places in Seychelles’ all of which have been posted on travel website Tripadvisor.com.

There are also reviews on the well-defined architecture and the unique setting of the place.

The Seychelles Minister for Tourism Alain St Ange, says it is pleasing to see businesses in the private sector earning recognition for their efforts and dedication in providing services and products to the tourism Industry.

Seychelles hotels as well as beaches have also earned recognition through awards given by TripAdvisor based on visitors’ reviews posted on its website.

Earlier this year two of Seychelles beaches featured in the Travelers' Choice awards for Beaches.

Anse Lazio beach on the second most populated Seychelles Island of Praslin and Anse Source D’Argent of the third most populated island of La Digue 7th and 21st respectively amongst 25 beaches worldwide.