Zimbabwe cholera deaths rise to 25 as WHO steps up response 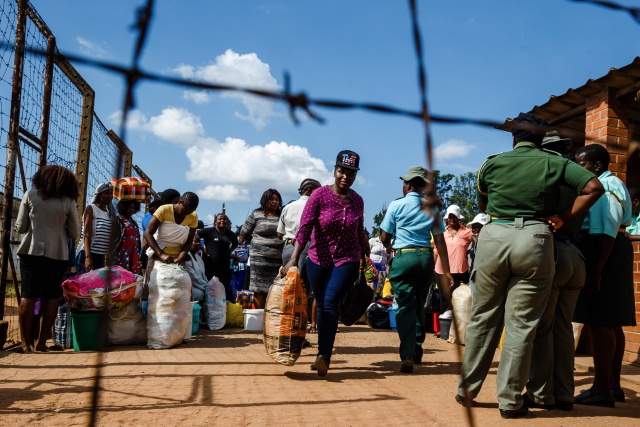 A female prisoner carries her belongings and gets ready to walk free as she is about to be released from the Chikurubi Prison, in Harare, on March 22, 2018. Zimbabwean President Emmerson Mnangagwa, who succeeded ousted Robert Mugabe in November, has pardoned at least 3,000 prisoners to clear out overpopulated jails, officials said on March 22 2018. The pardon will see the release of all female prisoners except those serving life terms, as well as all disabled and juvenile prisoners. Terminally-ill prisoners and those above the age of 60 who have served a third of their time will also be freed. (Jekesai NJIKIZANA / AFP)

(AFP) - The death toll from a cholera outbreak in Zimbabwe has risen to 25, the government said Thursday as the World Health Organisation warned that the water-borne disease is spreading rapidly in the capital Harare.

"There are now 3,766 cases. The number of deaths is now 25," Health Minister Obadiah Moyo told journalists.

The WHO said it was "scaling up its response" to contain the outbreak which it said was "expanding quickly in Harare" -- a city of more than two million people.

At least one of the deaths was recorded outside the capital, in the southeast district of Masvingo.

"When cholera strikes a major metropolis such as Harare, we need to work fast to stop the spread of the disease before it gets out of control," Matshidiso Moeti, WHO regional director for Africa, said in a statement.

A WHO situation report revealed that first-line antibiotics were struggling to treat the disease, which has spread to five of the country's 10 provinces.

"There is resistance to the first-line medicine," the report said, with tests suggesting antibiotic drugs ciprofloxacin and ceftriaxone could be ineffective and the alternative drug azithromycin was not available.

"Relevant medicines should be purchased as a matter of urgency as soon as resistance patterns have been ascertained," it recommended.

The cholera outbreak, first detected in the township of Glen View outside Harare on September 5, prompted the health ministry to declare an emergency in the city.

Authorities have banned public gatherings in Harare while health ministry personnel are supervising burials of victims.

The University of Zimbabwe, the country's largest, said it had postponed indefinitely this year's graduation ceremony which was due on Friday following the cholera outbreak.

The ban could also affect a rally by the main opposition on Saturday at which the party has planned a mock inauguration for its leader Nelson Chamisa whom supporters say was denied victory in July elections by fraud.

The WHO reported that health personnel face shortages of medicine and intravenous fluid as well as sewer blockages, lack of protective clothing and erratic water supplies.

Cholera outbreaks have occurred regularly in Zimbabwe's cities where supplies of potable water and sanitation facilities are scarce.

Informal housing areas without running water have mushroomed, and basic infrastructure has collapsed due to years of neglect.

Tests from some wells and boreholes showed water was contaminated with cholera and typhoid-causing bacteria.

Zimbabwe, which was ruled by Robert Mugabe from independence in 1980 until his ousting last year, suffered its worst cholera outbreak in 2008.

President Emmerson Mnangagwa, who succeeded Mugabe, has pledged to tackle the current outbreak.