From weeds to a royal honeymoon: North Island, Seychelles revealed as the most expensive hotel in the world 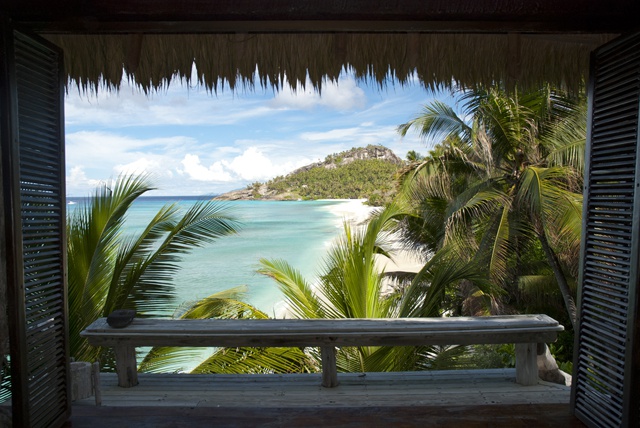 A partial view of the beach from a Villa on North Island (Gerard Larose, STB)

(Seychelles News Agency) - North Island in the Seychelles archipelago is remarkable for a number of reasons: it was the site of one of the very first recorded landing on the Seychelles islands in 1609 by the English East India Company vessel Ascension, whose Captain Alexander Sharpeigh reported that it boasted excellent ‘cokker nutts’ (coconuts) and an abundant population of wild giant tortoises.

After being turned into a typical colonial plantation in the early 1800s, harvesting fruit, copra and spices, it was eventually abandoned in the 1970s by its owner following the collapse of the coconut industry and the island fell into a sad state of disrepair, overrun with weeds, rats and feral animals.

Fast forward to today and you will find a very different state of affairs: no longer visited by the ships of the occasional spice merchant and plantation master, the island is now an exclusive eco-tourism resort, accessible only by helicopter and regularly patronized by the rich and famous, including the notable event of the honeymoon of the Duke and Duchess of Cambridge in May 2011.

The South African eco-tourism company Wilderness Safaris, which bought the island for $5 million in 1997, has managed to eradicate the island’s rats, cats, owls and pigs left behind from its coconut farming days. The resort even embarked on an ambitious plan to re-introduce indigenous trees and birds to the island, including the critically endangered Magpie Robin.

The most expensive in the world

North Island has now been revealed as the most expensive hotel in the world at an average cost of $6,695 per night, according to a survey conducted by Travelmag.com in June this year, with another private island resort in the Seychelles, Fregate, following behind in second place at $5,246 per night.

The research team at Travelmag compared the rates of luxury hotels around the world for the months of July and August 2014, the most popular and convenient time for European tourists to travel.

The rankings were based on the minimum price a couple could be expected to pay per night at each respective hotel or resort, including taxes and other fees.

Laucala Island in Fiji was ranked in third place at an average of $5,040 per night. Four luxury safari lodges in Botswana and Tanzania, a luxury tent camp located on Canada’s Vancouver Island, another private island resort in Tanzania and a luxury resort on the Italian island of Sardinia made up the ten most expensive hotels in the world.

The luxury spa resort of Maia, located on Seychelles’ largest island, Mahé, at an average cost of $2,420 per night, also made the list as the eighteenth most expensive hotel accommodation in the world.

The rates listed below reflect the average price a couple can expect to fork out to stay for one night during the main northern hemisphere summer travel period of July to August 2014:

Luxury with a conscience

The North Island resort’s exclusive but relaxed approach is the main reason why the rich and famous are more than willing to shell out so much money to stay in one of the 11 villas on the island, but another reason to suffer the indignity of enjoying air conditioned luxury with cocktails on tap and 34 towels per room could be the knowledge that the cost includes funding for an important ecological experiment – rehabilitating an island paradise and attempting to save several endangered species from total extinction.

Tourism » Be a reporter: Write and send your article » Subscribe for news alert
Tags: North Island, most expensive hotel, Fregate, honeymoon, Duke and Duchess of Cambridge