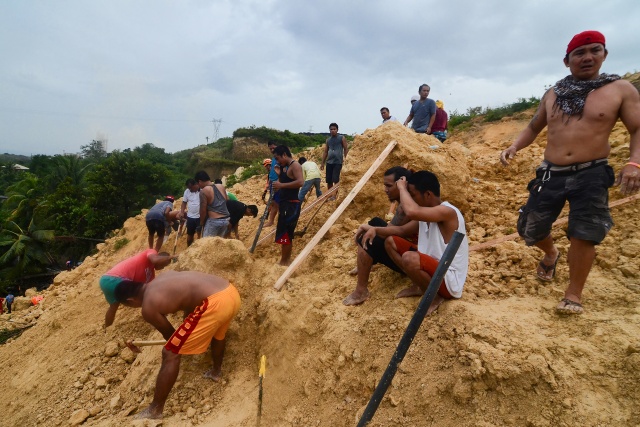 Residents dig amongst the rubble as they help rescuers search for survivors at the landslide site in Naga City, on the popular tourist island of Cebu on September 20, 2018. At least three people were killed and 10 homes buried early on September 20 in the central Philippines when heavy monsoon rains unleashed a landslide in a rural farming community, authorities said. (ALAN TANGCAWAN / AFP)

(AFP) - Six people were killed and dozens are missing after a landslide unleashed by monsoon rains struck in the central Philippines Thursday, inflicting more misery on the already storm-battered nation.

Emergency workers in helmets and locals with shovels rushed to search for survivors of the new disaster, which happened in the village of Tina-an on the popular tourist island of Cebu.

Days of heavy monsoon rains caused a steep slope of crumbly limestone to collapse and crash into at least 10 homes early Thursday when many people would still have been in bed.

Injured survivors were wheeled into the back of ambulances and the dead were laid on pews at a local church.

"There are more than 100 rescuers on the site. They are using backhoes (excavators) and other heavy equipment," he added.

Civil defence officials in the region said landslides are fairly rare on Cebu, an elongated island with low hills.

As Thursday's search for survivors unfolded, efforts continued in the hunt for bodies in the mining area of Itogon in the mountainous north of the Philippines, which was the area worst hit by the typhoon.

Most of those killed in the storm died in landslides in the Cordillera range, which includes Itogon and other towns in a region known for gold mining.

Police said on Thursday that the death toll rose to 88, primarily due to corpses recovered from the Itogon slide.

Mangkhut swamped fields in the nation's agricultural north and smashed houses when it tore through at the weekend.

Itogon is one of the country's oldest mining hubs, with known gold panning activity stretching back to before the 17th-century Spanish colonial conquest.

Thousands of people from all over the country still flock to the upland town seeking their fortune in largely unregulated mining, which is accompanied by periodic deadly accidents.

General » Be a reporter: Write and send your article » Subscribe for news alert
Tags: Phillipines, landslides

At least 41 dead in Uganda landslide