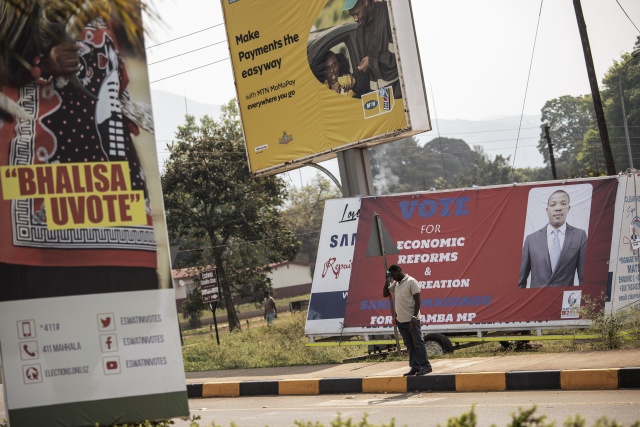 People walk past eSwatini parliamentary election billboards on September 19, 2018 in Lobamba. Winners from the 59 constituency ballots take seats in a parliament over which the king has control. He also appoints a further 10 directly. (GIANLUIGI GUERCIA / AFP)

(AFP) - Voters in the African kingdom of eSwatini, previously known as Swaziland, cast ballots Friday in an election where political parties are banned and winning candidates are sidelined by a monarch who wields absolute power.

In the largely rural country that suffers grinding poverty, the election process divides the 1.3 million population, with critics calling it a sham but supporters saying it is a unique blend of tradition and politics.

At more than 300 well-organised polling stations in schools and community halls, Swazi citizens chose from individual candidates who are almost all loyal to King Mswati III.

The king is one of the world's last absolute rulers, with complete control over parliament and government as well as the judiciary, civil service and security forces.

Mswati, who has 14 wives and more than 25 children, has a reputation for lavish spending on private planes and royal palaces, while 63 percent of his subjects live below the poverty line.

Without warning or consultation, he changed the country's name from Swaziland to eSwatini ("land of the Swazis") in April.

As she waited to vote, Zodwa Mabuza told AFP that the absence of political parties fostered a closer link between citizens and elected representatives.

"We know the person we are voting for," she said in the western constituency of Lobamba Lomdzala.

"The issues are job opportunities, proper roads and more food packages for the elderly."

But another voter, who declined to be named, said that "the parliament can talk all they want, but at the end of the day there is only one boss".

Pholile Dlamini, deputy chair of the Elections and Boundaries Commission, dismissed criticism from opposition groups, donor nations and rights activists that the elections were not credible.

"To the critics, it is important to say that there is no 'one size fits all' democracy or system of government," said Dlamini.

"This system is a perfect fit because eSwatini is a modern-day country that has chosen to preserve its very rich cultures and traditions."

Winners from the 59 constituency ballots will take seats in parliament's lower house, along with 10 lawmakers that the king appoints directly.

He can veto any legislation, appoints the prime minister and cabinet, and is constitutionally above the law. He also selects 20 of the 30 senators in the upper house.

"The election is a farce, of course," said Bheki Makhubu, editor of The Nation magazine, who spent 15 months in jail from 2014 to 2015 for contempt of court after exposing misconduct among judges.

"The king is the executive authority of all things, based on the presumption he is the wisest of us all."

Political parties were banned by the king's father in 1973, and still face severe restrictions despite a 2005 constitution that, in theory, guarantees their rights.

Election campaigning was discreet, with no rallies, no manifestos and just a handful of candidate posters on main roads outside the capital Mbabane.

The Pudemo party, which was designated a terrorist organisation in 2008 under draconian laws imposed that year, had called for a boycott of the vote, describing it as "fixed" by the king.

"The key causes of public dissatisfaction are fiscal mismanagement, private spending by the king and widespread poverty," Michael Jones, an analyst at the London-based Fitch risk consultancy, told AFP, adding that the election offered little hope of policy change.

The Southern African Development Community bloc and African Union deployed observer missions. The EU and Commonwealth did not send teams after issuing reports criticising the 2013 election.

The Communist Party described the vote as "crude window-dressing" for an autocracy.

But after voting in the village of Mahlanya, former MTN telecoms executive Themba Khumalo said that "people understand the election, and it works for us".

"I have travelled around the world and there are many democracies -- why can't we come up with our own as Swazis, as Africans?" he asked.

Counting began after polls closed on Friday evening, with results due over the weekend. The king is expected to appoint a new prime minister within the next month.

Africa » Be a reporter: Write and send your article » Subscribe for news alert
Tags: eSwatini, Vote