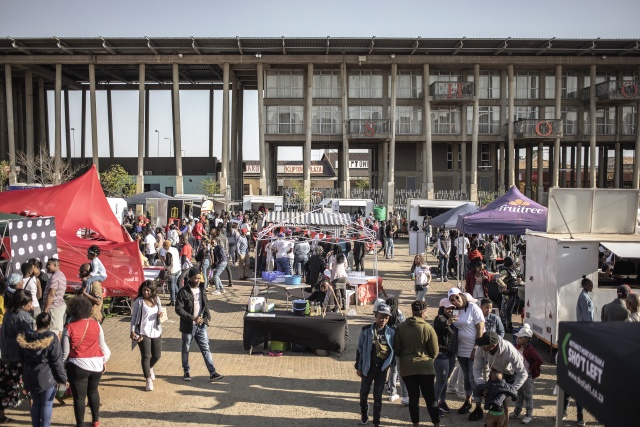 Hundreds of people attend the Kota Sandwich Festival on September 8, 2018 at Kliptown in Soweto, South Africa. Soweto's best-known street food is the kota sandwich. "Kota" is an approximation of the word "quarter," for the quarter of the loaf of bread that is the base of the sandwich. (GIANLUIGI GUERCIA / AFP)

(AFP) - South Africa on Tuesday announced visa reforms aimed at luring investment and tourists to help lift the continent's most advanced economy out of recession.

Home Affairs Minister Malusi Gigaba unveiled a raft of regulations allowing frequent visitors and foreign business travellers to have long-term multiple-entry visas of up to 10 years.

The rules will take effect from next month.

"Changes to our visa architecture have the potential to boost tourism and make business travel more conducive," Gigaba told reporters.

"We are simplifying visa requirements for countries such as China and India."

Applicants from those two countries will be able to have a 10-year visa processed within five days.

"This arrangement is meant to attract business people and prospective investors," he said.

Anti-trafficking rules requiring parents to travel with birth certificates of their children will be simplified, he added.

Visa reforms are part of an economic stimulus plan announced by President Cyril Ramaphosa on Friday to boost investor confidence after South Africa entered a recession in the second quarter of this year.

Data showing that South Africa had slipped into recession dealt a blow to Ramaphosa who came to office in February ahead of elections next year.