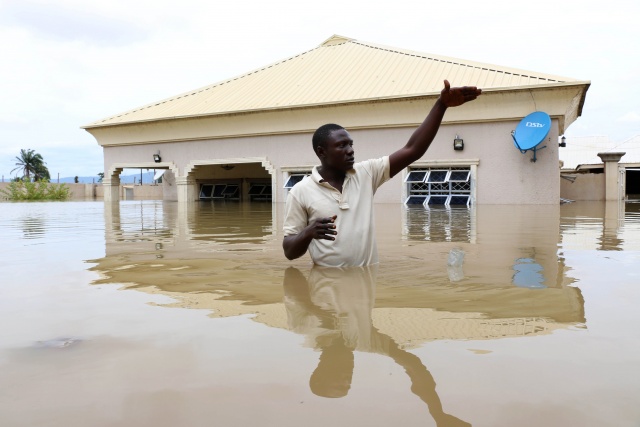 A man gestures next to his flooded house following heavy rain near the Nigerian town of Lokoja, in Kogi State, on September 14, 2018. (Sodiq ADELAKUN / AFP)

The National Emergency Management Agency (NEMA) said 199 people had lost their lives after the main Niger and Benue rivers burst their banks.

A national disaster has been declared in the central states of Kogi, where the two rivers meet, and Niger, plus Delta and Anambra in the south.

NEMA said in its latest update that "large-scale flooding" since late last month "impacted 826,403 people". Of those, 286,119 had been made homeless.

Numbers were expected to rise and more rain is expected in the coming weeks, it added.

Shelter, food, medicine and other items such as mosquito nets were "priority needs", the report said.

The flooding has not only devastated towns and villages along the rivers but also destroyed crops and killed livestock, said the secretary-general of the Nigerian Red Cross, Abubakar Kende.

But he warned: "One of our biggest concerns following extensive floods like this is the threat of cholera and other diseases."

Lack of sanitation, healthcare and clean water "could have deadly consequences" and add to the nearly 28,000 suspected cases of cholera reported across Nigeria since January, he said.

The United Nations last weekend said there had been more than 3,000 recorded cases of cholera and 97 deaths in the northeast Nigerian states of Borno and Yobe in the past two weeks alone.

In the wider Lake Chad region comprising Nigeria, Niger, Chad and Cameroon, more than 500 people have died from the water-borne disease since the start of the year.

Northeast Nigeria has also been the epicentre of Boko Haram's Islamist insurgency, which has left more than 27,000 people dead since 2009.

Some 1.8 million are still homeless, with many of them living in makeshift camps as a result of the conflict.