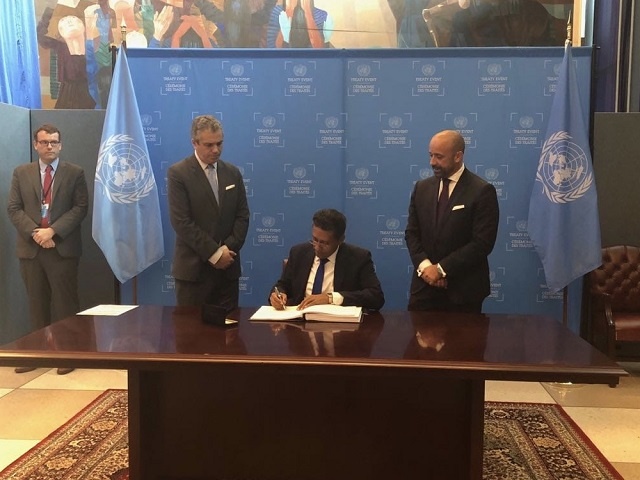 President Faure signed the Treaty on the Prohibition of Nuclear Weapons at the 73rd session of the United Nations General Assembly in New York. (State House)

(Seychelles News Agency) - The President of Seychelles, Danny Faure, signed the Treaty on the Prohibition of Nuclear Weapons on Wednesday at the 73rd session of the United Nations General Assembly in New York, said State House.

At the signing ceremony, Faure said that he “remained committed to global nuclear disarmament and that weapons with the capability to annihilate humanity do not belong in the world.”

The Treaty on the Prohibition of Nuclear Weapons is the first legally binding international agreement to prohibit nuclear weapons, with the goal of leading towards their total elimination.

Negotiations for the treaty started in the United Nations in March last year and passed in July the same year.  In order to come into force, the Treaty needs to be signed and ratified by at least 50 countries. As of this month, 67 states have signed and 19 have ratified.

Faure met with Natalia Kanem, the executive director of the United Nations Population Fund (UNFPA), where discussions focused on ways the agency can share its expertise to complement the reform and strategic plan recently launched in Seychelles in the health sector.

He made special reference to the “efforts being made to ensure safe and wanted childbirth while also working to curb teenage pregnancy that negatively affects both the socio-economic and educational aspirations of young girls.”

On her side, Kanem described Seychelles as a model nation in terms of its holistic approach to universal health care, gender parity, and the inclusion of women in high levels of the three branches of government. She also commended the government’s policy focus on educating the youth on reproductive health.

The head of state of Seychelles, an archipelago in the western Indian Ocean, also held bilateral discussions with Kersti Kaljulaid, the President of Estonia, a northern European country. During the meeting, Faure expressed his desire for Seychelles to learn from Estonia in the technology sector and called on his Estonian counterpart to assist the government of Seychelles with the development of 'E-Governance'.

President Kaljulaid on her side commended Seychelles on its approach to ocean governance and the concept of the Blue Economy, which she said would be the next frontier for sustainable economic development.

She also expressed interest in learning about Seychelles' experience as a strong advocate for action against climate change, and its methods of innovative financing to help mitigate its effects.

In a bilateral meeting with Simon Coveney, the Deputy Prime Minister of Ireland, Faure expressed the desire to work closely with Ireland and share experiences on ocean governance and the economic benefits derived from the sustainable management of ocean resources.

He spoke of the historic relationship shared by Seychelles and Ireland, primarily in the educational sector. Both leaders agreed to deepen the ties between the two nations.

Faure also met with Carl B. Greenidge, Vice President of Guyana, in which he spoke about the collaboration between like-minded small states. He said this highlights the importance of South-South cooperation for mutual progress on the path to development.