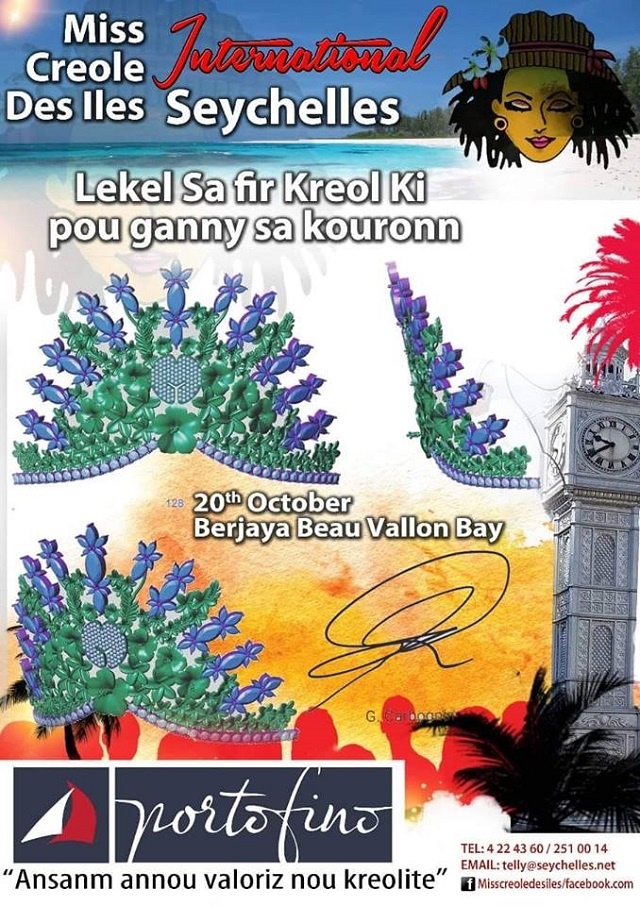 The pageant will be held in Seychelles on October 20. (Telly's Modelling Agency, Facebook)

'Miss Creole des Iles International' is back this year after not being organised in 2017. The revamped pageant aims to celebrate and promote the rich and diverse Creole-speaking islands.

Terry Carolla, the organiser of the pageant, told SNA that all is set for the event scheduled to be held in Seychelles, a group of 115 islands in the western Indian Ocean, on October 20.

“What we want is to have a Creole girl from a Creole-speaking country in the region as well as the Caribbean come to the capital city of the Creole world and take part in the pageant,” said Carolla.

According to Carolla this is not only a sign of solidarity but will show that Creoles can unite and promote their rich culture.

“We hope that the winning girl can travel to one or two of the countries for exchanges and as well as experiencing the culture of these islands,” explained Carolla.

The organiser added that even though the Creole people are geographically dispersed it is important that these people can get to meet, share and learn from each other’s way of life.

“We want the pageant to be a way to bring the islands closer and together,” said Carolla.

The Miss Creole des Iles International pageant was first organised in 2015. Its main aim is to bring young Creole women from Creole-speaking islands to the event to encourage friendship.  Bringing together a celebration of youth, fashion, design, music, beauty, exhibition and overall the promotion of the Creole-speaking islands.

“This pageant is reminding us of our values and identity. We are enabling these young women to cope with the many challenges and changes occurring around Seychelles and other nations,” said Carolla.

Carolla – who is the owner of the Telly’s Modelling Agency – adds that more importantly, the winner will become the Creole ambassador of Creole-speaking islands.

“We want to celebrate every island in the Caribbean and in the Indian Ocean where the Creole language is spoken,” said Carolla.

To date, only Rodrigues – an island administered by Mauritius – has shown a strong interest to join, and Carolla is hopeful that at least two other islands will send their participants for the contest.

“We are positive that this pageant will be a success as we will have more than one Seychellois registered,” said Carolla.

SNA met with Carolla during a rehearsal with participants of the pageant, which will be held at the Berjaya Beach hotel in Beau Vallon in the north of the main island of Mahe.

Carolla said that he hopes the project to bring creole-speaking islands together is given due importance. “For instance, we hope that this can be looked and get recognition internationally by the UNESCO for instance,” explained Carolla.

Physical beauty will not be a strong criterion on which participants will be judged, but their ability to speak Creole and to help to valorise and promote the Creole culture is of greater importance.

Beauty queen from Seychelles to take part in Miss University Africa, in Nigeria, next month