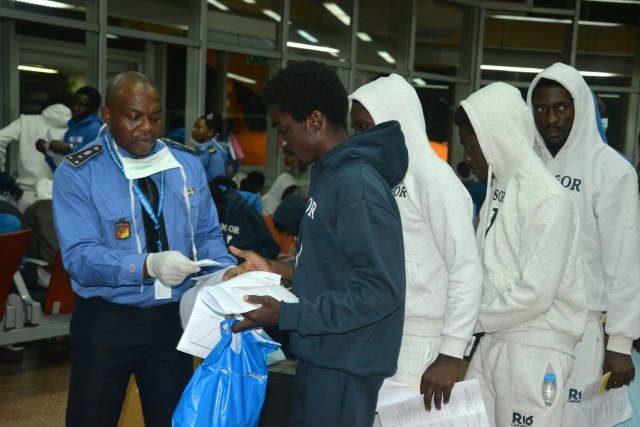 Cameroonian migrants receive registration forms upon their arrival after spending several months in Libya, on November 22, 2017 at the Yaounde International Airport in Cameroon. Roughly 80,000 Cameroonian have since returned home but 238,000 remain displaced, according to the International Organization for Migration.(KAZE / AFP)

(AFP) - "If you have the polling card, you go and vote, but it's complicated once you're there," said Yagana Adi, 55, who wants to vote in Cameroon's presidential election on Sunday.

Her identity papers were lost when she fled an attack on her village by Boko Haram jihadists in 2014.

The raid happened in Djakana in Cameroon's far north near the Nigerian border and forced her to abandon her home along with her 13 children.

"I said to the children that we were leaving, we walked for hours, days, and we arrived in Maroua," the regional capital, she said.

Two of her daughters did not manage to flee in time and were picked up by jihadists.

Nearly one in 10 people in the far north have followed a similar path to Yagana, fleeing repeated attacks by Boko Haram which is based in neighbouring Nigeria.

Roughly 80,000 have since returned home but 238,000 remain displaced, according to the International Organization for Migration.

Many have sought refuge with friends and family in the region's towns like Maroua.

"If you go into a Maroua neighbourhood, they're everywhere," said a humanitarian source on the ground.

"The problem is that they don't have their papers anymore and so can't register on the voter roll."

The electoral commission Elecam has vowed that those who have been "displaced will be able to vote," according to the organising body's regional director Amadou Ali.

"They're not just displaced people -- they are voters. The fact that they've been displaced will not have any impact on the election."

He added that people without their documents will be able to register to vote in the towns where they have sought refuge.

"It's not true, I wasn't able to get a voting card," retorted Yagana, as she rested on a mat.

Yagana and her family are now living on a vacant plot of land lent to her by a Maroua resident where they have erected a makeshift shelter using sheets and tarpaulins.

"I think less than one-third of those displaced in the far north are registered on the voters' roll," said Hans de Marie Heungoup, a Cameroonian researcher at the International Crisis Group (ICG) think-tank.

The region is Cameroon's most populous and its poorest and has previously voted overwhelmingly for President Paul Biya.

"There'll be an election in the far north, but who the people vote for is another question," said a prominent figure in Maroua where Biya made his only appearance of the campaign so far at the weekend. It was also his first visit to the region since 2012.

Majority-francophone Cameroon's two English-speaking regions -- the southwest and northwest -- have been rocked by a separatist insurgency since a symbolic independence declaration one year ago.

"The challenges for displaced people to vote there are greater," said a senior military source based in Yaounde.

The army has been deployed to the two restive regions to battle separatist fighters since the end of 2017.

According to the ICG, the secessionists control "a significant proportion of rural areas and main roads" in the regions.

In the southwest, 246,000 people have been displaced according to the UN, while no estimate exists for the northwest region which is largely inaccessible to aid groups and journalists.

Some 25,000 others are sheltering in neighbouring Nigeria, according to the UN.

"The people have sought refuge in the bush and they are living in awful conditions," said a humanitarian source in Buea.

The town is rocked by bursts of gunfire daily, according to local sources.

No reception centres for displaced people have been opened in the anglophone areas where separatists have threatened to disrupt the vote.

In the face of continuing clashes, a surge of troops is planned, according to the senior officer.

Elecam has also said that some polling stations will be "relocated" in the anglophone region which has traditionally been a reliable well of votes for the main opposition Social Democratic Front (SDF) whose candidate is Joshua Osih.

He has described the planned "relocations" in interviews as "an illegal measure" that could damage his chances.

Asked about the looming vote, a student in Douala who fled Buea with his family said: "The election? It doesn't concern us. I want to get my father's job and our house back. Here, we are stuck."

Africa » Be a reporter: Write and send your article » Subscribe for news alert
Tags: Cameroon, politics