Hunger and fighting persist despite 'peace' in South Sudan 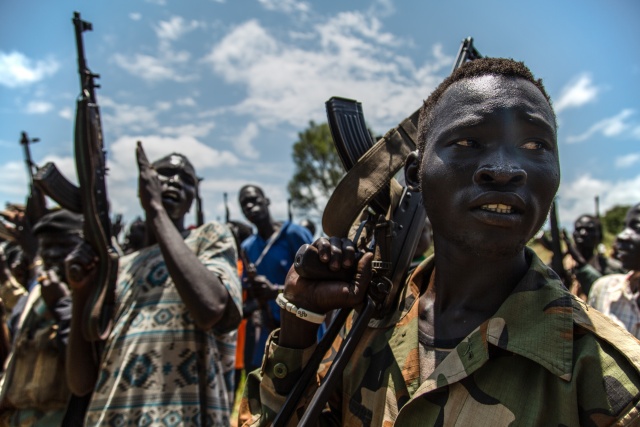 Rebels of the Sudan People's Liberation Movement-in-Opposition (SPLM-IO), a South Sudanese anti-government force, take part in a military exercise at their base in Panyume, South Sudan, near the border with Uganda, on September 22, 2018. Despite a peace deal being signed by the President of South Sudan, Salva Kiir, and opposition leader Riek Machar on September 12, conflict in Central Equatoria continues as both warring parties fight for control. (SUMY SADURNI / AFP)

(AFP) - South Sudan's warring leaders signed another peace deal last month, but while the political elites prepare to carve up power once again, hunger and fighting continue far from the capital.

"We heard they signed peace, but we've yet to see it here," said Mary Nyang, a 36-year-old resident of Kandak, an isolated northern village. Here, hunger is the norm and battles between government and rebel soldiers a very recent memory.

The war began in December 2013 when President Salva Kiir accused his deputy Riek Machar of plotting a coup.

A brutal conflict flared up, often fought along tribal lines and characterised by massacres of civilians, rape and looting.

Nyang is one of a staggering 4.2 million people uprooted since South Sudan's latest war began -- roughly a third of the population.

A recent scientific study calculated that more than 382,000 people have died as a result of the civil war.

"Conflict is the main driver of this desperate situation," said Pierre Vauthier of the UN's Food and Agriculture Organization (FAO).

Kandak is in an opposition part of the country and so suffers deliberate neglect: there are no public services, no schools, no health facilities.

Harvests and markets have been disrupted by the war and so people here rely on aid agencies for deliveries of life-saving food.

Lack of roads, insecurity and the sometimes deliberate targeting of aid workers -- 107 have so far been killed during the war -- mean that when food arrives it comes by air.

"We are unable to move supplies either by road or river," said Tomson Phiri of the UN's World Food Programme (WFP).

As a result people are barely surviving.

"Food is a challenge, it is very little," said 28-year-old John Jal Lam, a father of eight children from two wives, as he collected his family's rations of sorghum.

On the other side of the country, Kerwa, close to the border with Uganda, across which over a million South Sudanese have fled, is also opposition territory.

The fighting continues, despite the peace promises.

Each side routinely accuses the other of being the aggressor, and both are belligerent in response.

"We still fight for the freedom and democracy of our country, until we achieve the goal," said Lokujo.

Here, in the Central Equatoria region, the latest confrontations are, in fact, a result of the peace deal with government and rebels fighting over whose officials will hold sway where.

The violence means people in Kerwa are still more abandoned than those in Kandak, with no aid agencies at all and no food deliveries.

"For us, we are tired," said Jocelyn Kako, who was forced from her home and now lives in a camp in Korijo, a nearby village, run by the rebels.

While South Sudan's poorest continue to starve and suffer its leaders are planning the next phase of their rule, with an interim government to include both Kiir and Machar leading to elections.

Few believe the latest peace deal will fare much better than the last one, which collapsed in a hail of bullets two years ago.

For civilians engulfed in the maelstrom there is one, simple message: "I want to tell them that enough is enough," Nyang said. "Let's have peace now."