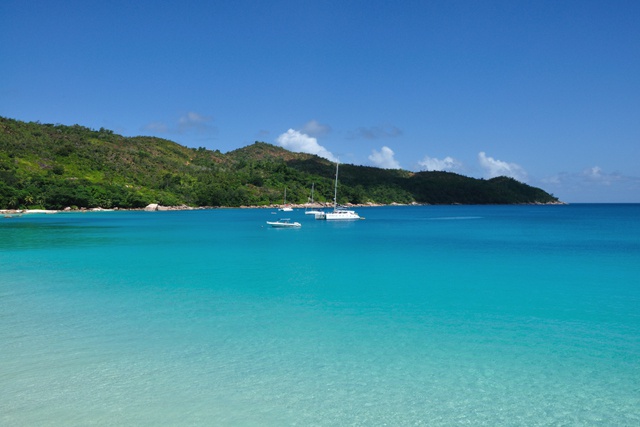 The Seychelles second most populated island of Praslin home to Don Hoareau and Francois Meriton two fishermen who are lost at sea for over a month (Gerard Larose, STB)

(Seychelles News Agency) - It’s been one month since two fishermen from Seychelles second most populated island of Praslin have been reported missing. The fishermen, Don Hoareau and Francois Meriton were on board a small fishing vessel with enough supplies to last for five days of fishing.

The Seychelles archipelago of 115 islands has an Exclusive Economic Zone of 1.3 million square km, and with fish being the main source of protein for the island nations’ population of around 90, 000 it is no wonder there are so many Seychellois men going out to sea on a day to day basis.

Currently there are over 75 registered fishermen amongst the population of over 5, 00 on Praslin island, and as the days go by several of them who have been faced with the same situation try to describe the ordeals that the two missing men must be facing.

Stories of boats and their crew who have been lost at sea are often passed on from generations to generations and shared amongst fishermen.

One renowned story is that of ‘Marie-Jeanne’ which was lost at sea for more than 70 days in 1953 with children, women and men on board. Only two out of ten passengers survived the ordeal. Amongst the survivors was 18 year old Antoine Vidot, who later lived to tell the tale which was transcribed into a book and a play.

Vidot and his surviving companion were apparently rescued by an Italian tanker in April 1953.

Another dramatic story is that of ‘St Andre’, a boat hailing from Cascade, a district on the East Coast of the main island of Mahé, which was lost at sea for 81 days.

Praslinois, Alexandre Lesperance, who was then living on the main island, now 54 years of age, was amongst the two survivors onboard the fishing boat. He, along with Franck Nancy, saw three of their comrades succumb to lack of water and food and scourged by the sun.

Lesperance recounts that fateful day, on July 18, 1995 when their boat the ‘St Andre’ departed Mahé for five to six days of fishing.

“On the fifth day, we had had enough fish and we rested during the night. When we woke up, we were drifting and we had lost our anchor. We did not see any boats for days. We fed on boiled fish and drank rain water. Almost one month later, the youngest of the crew, Franco Nancy died. The crew later found that the latter was so thirsty that he had drunk sea water, which killed him.” Lesperance told SNA.

Then came Norcy Souris, who Lesperance says got tired of eating boiled fish.

“We woke up one day and found him dead. He had starved to death.’”

“The third crew member, Ernest Augustin, was asthmatic. He died in my arms,” recounts Lesperance.

It was on October 6, 1995 that the fishing vessel was picked up by a Spanish vessel which Lesperance called ‘Churiberi’. He recalls that there were three Seychellois on board the vessel when they were picked up close to the Indian Ocean island of the Maldives.

With one month now gone since ‘Rouze’ and its two crew members were reported missing, the survivor of such an ordeal says the families should be hopeful.

“At this time, if the boat has not capsized, they will be drifting east of Seychelles towards Indonesia or Sri Lanka. If they are not picked up by other fishing vessel, they can remain alive for many more days. It is still early to think the worst has happened to Francois and Don,” declares Lesperance.

Meanwhile the Seychelles Maritime Safety Administration (SMSA) has said that they are not abandoning their search for the fishing vessel.

Speaking to SNA this morning, the Director General of SMSA Captain Joachim Valmont said that the Seychelles Coast Guard has its vessels and surveillance planes deployed to ensure the protection of the Seychelles EEZ against piracy and at the same time keeping an eye on the fishermen at sea.

“While these daily operation are ongoing the Coast Guard vessels and surveillance planes are also on the lookout for the missing fishing boat,” says Valmont adding that the search has been extended to beyond the last known location of the boat.

According to information received from the Seychelles Coast Guard the last recorded position of Rouze was on June 6, when the VMS position picked up was 24 nautical miles, North East of the third most populated Seychelles island of La Digue.

Don Hoareau and Francois Meriton the two fishermen onboard ‘Rouze’ left Baie Ste Anne on Praslin on the June 5, and was expected back after 7 to 8 days spent at sea.

They have been reported missing since June 13.

With the present South East monsoon condition where fishermen face adverse weather conditions out at sea with rough seas Valmont is once again advising them to ensure that they have a Vessel Monitoring System (VMS) on board and ensure that it is working properly and is switched on at all times.

He noted that the Seychelles Fishing Authority can help fishermen to have install their VMS, adding that he does not understand why some choose not to have one or choose to switch off their VMS when they are out at sea.

“For their own security fishermen should keep their VMS switched on and should also notify the Port Authority of where they are going, how many men are onboard the fishing vessel, and when they are due back so that there is a record and in case they are not back by the specified time the Port Authority can contact the Seychelles Coast Guard immediately instead of waiting several days to be notified by the boat’s owner,” said Valmont.

The Director General of SMSA has explained that at the moment Seychellois fishermen are not obliged under any law to install a Vessel Monitoring System onboard their vessel but he noted that the Seychelles Fishing Authority (SFA) has started the process to have such regulations in place in the near future.