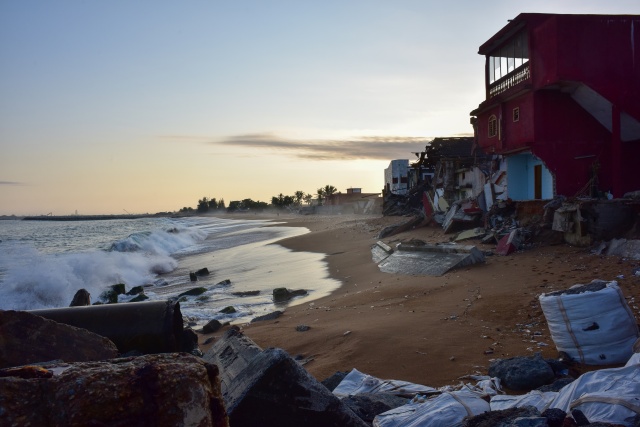 (FILES) This file photograph taken on August 27, 2018, shows the ruins of a hotel which was destroyed by the rise in sea levels.on the beach in Vridi, the industrial neighbourhood of Abidjan. Avoiding global climate chaos will require a major transformation of society and the world economy that is "unprecedented in scale," the UN said October 8, 2018, in a landmark report that warns time is running out to avert disaster. (ISSOUF SANOGO / AFP)

(AFP) - Countries must work urgently to solve water issues caused by climate change, a Dutch official billed as the world's only "water ambassador" said Monday, backing a dire warning from the UN.

Henk Ovink said nations should be planning now to anticipate future problems, from flooding or sea level rises at one end of the scale to drought and conflict over water resources at the other.

"We need a radical change," said Ovink, the special representative on water affairs for the Netherlands, who says his post is the only one of its kind in the world.

"There is this urgent need to change, the IPCC report is right, we are not heading in the right direction," he told a small group of international journalists in The Hague.

The UN's Intergovernmental Panel for Climate Change (IPCC) said in a landmark report Monday that warming is on track toward an unliveable 3C or 4C rise and avoiding global chaos will require a major transformation.

Ovink -- who travels the world spreading the know-how gleaned by the low-lying Netherlands in its millennium-long battle against the seas -- said the report shows "we all need to do more."

Recent events such as the disastrous flooding caused by Hurricane Florence in the United States, Japanese typhoons and the Indonesian tsunami showed that "the world isn't ready for these challenges, and is responding after these crises, not before."

His job involved working with at-risk areas -- including Bangladesh, Southeast Asia and Latin America -- to help them work to anticipate problems.

He said one important area was fostering "collaboration" -- within and between countries, agencies and the UN -- citing the example of the Netherlands where "our water democracy is nearly 1,000 years old."

But while US President Donald Trump's decision to pull out of the Paris climate pact caused international dismay, Ovink said that there was no need to be unduly pessimistic.

"I don't despair only because of Trump," said Ovink, who previously served on a task force on hurricane rebuilding created by Trump's predecessor, president Barack Obama.

"The world is not dependent on one nation. It wasn't easy before Trump."