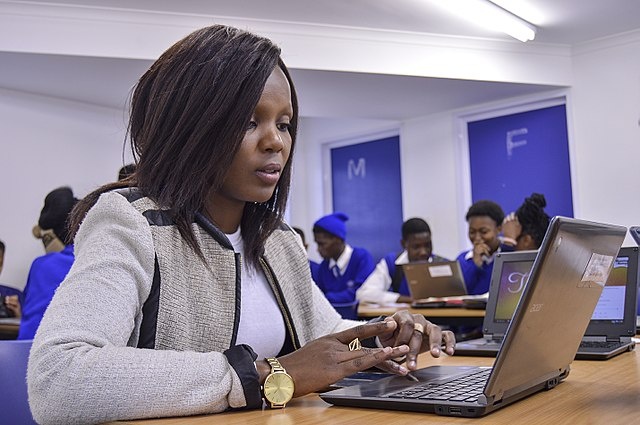 A 2014 study by the African Development Bank showed that using ICT as an enabler will contribute to lessening the challenges affecting women to start or grow their businesses. (Wikimedia) Photo License: CC BY-SA 4.0

(Seychelles News Agency) - An economic empowerment project for women called ‘50 Million African Women Speak - Digital Networking Platform’ has been launched in Seychelles, one of 38 countries in Africa where the project will be unveiled.

The project is an initiative of the Common Market for Eastern and Southern Africa, or COMESA,  and was launched last year.

“Women play a critical role in the development of our economies. However, they continue to face gender-specific barriers such as limited access to information and networking opportunities, lower levels of education and business training,” explained the Director of Gender and Social Affairs at COMESA,  Beatrice Simwapenga – Hamusonde.

Weak property rights that deprive women of collateral and tangible assets and social barriers that discourage them from thriving as entrepreneurs are other reasons which the director cited as hindering women.

Formed in 1994, COMESA is a free trade area with 21 member states stretching from Tunisia to Swaziland.

According to Simwapenga – Hamusonde, a 2014 study by the African Development Bank revealed that the use of Information Communication Technology as an enabler will contribute to lessening some of the challenges affecting women to start or grow their businesses.

Seychelles is the 9th country where the project has been launched. “Women entrepreneurs in Seychelles and the region will use the platform to access information and linkages to business services, training and market opportunities,” said Simwapenga – Hamusonde.

The platform is unique and will build a community of existing and potential women entrepreneurs who will act as peers, mentors and advisors to each other. This will allow women to share lessons, success stories as well as conduct business online with their counterpart in Africa and beyond.

Marie Celine Zialor – director of Enterprise at the Guy Morel Institute -- told SNA of Friday that such project should only bring positive benefits for Seychellois women.

“One of the best tools in business is networking, and this project is providing just this; networking platform especially for women so that they can get access to information, training, finance, markets and anything else that they will need to propel them forward in entrepreneurship,” said Zialor.

The institute recently organized the first FemBioBiz competition in Seychelles -   a group of 115 islands in the western Indian Ocean. The FemBioBiz Acceleration Programme was created to develop leadership, technological and business skills in female-owned businesses within the Southern African Development Community.

“In Seychelles, there are many women in business, but the most successful ones are men, and there are certain fields, such as seafood post-harvest processing which is entirely dominated by men. Together with our partners, we seek to engage with such international platforms to customize local projects for different groups of entrepreneurs, and across all sectors” said Zialor.

In September 2016, three regional economic communities - COMESA, the East African Community (EAC) and the Economic Community for Western African States (ECOWAS) - signed a Memorandum of Understanding to jointly implement the project which is targeting 50 million women in business and those with interest to venture into business.

The project was launched on the island nation during a two-day meeting held last week at the Savoy Resort and Spa at Beau Vallon in the north of the main island of Mahe.

“We have also set up the project country teams - who will be responsible for the collection and development of content to be uploaded on the platform. We have also agreed on activities to be undertaken by the team to the run-up of the platform launch” said Simwapenga – Hamusonde.

The project will be led by the Ministry of Family Affairs as it holds the gender portfolio in close partnership with the public and private sectors, and not for profit organisations which will reach out to the users to raise awareness of the platform.