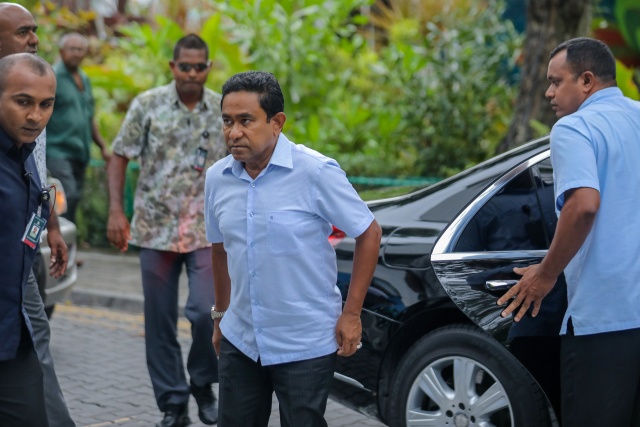 Lawyers for Yameen's Progressive Party of Maldives (PPM) told reporters that they are alleging that the September 23 vote was rigged by the independent election commission.

"So in light of that, President Yameen decided that the challenge must be filed for the rights of his supporters," he added.

It was however unclear whether the Supreme Court would agree to consider the challenge.

The election in the Indian Ocean archipelago, which has seen a tussle for influence between India and China, was won by Ibrahim Mohamed Solih with 58.4 percent of the vote.

Solih was little known before the election but was backed, in a remarkable turn of events given the Maldives' turbulent recent political history, by all opposition parties,

All of Yameen's other main rivals were either behind bars on charges that critics said were trumped up, or in exile.

Yameen had reluctantly conceded defeat amid international pressure from regional superpower and immediate neighbour India and others.

But he has been publicly urging his supporters to challenge the results.

Constitutionally, he can remain in office till November 17 when he has to hand over to Solih, barring any last minute court intervention.

He was barred from contesting the September 23 poll won by his party's nominee Solih, who defeated Yameen despite what critics said was a biased media and a rigged system.

Nasheed was the country's first democratically elected president but was sentenced to 13 years in prison for terrorism in 2015, in a trial the UN said was politically motivated.

He went into exile a year later, after being granted prison leave for medical treatment in the UK.

Gayoom, 80, and his legislator son Faris Maumoon, were released on bail by the High Court in Male, raising hopes that other political prisoners will be freed soon.

Gayoom had ruled the nation of 340,000 Sunni Muslims for 30 years until he was defeated by Nasheed in the Maldives' first multi-party elections in 2008.

Gayoom, along with several top judges, was arrested in February and charged with trying to overthrow Yameen.

The president responded by declaring a 45-day state of emergency to block his impeachment.

Another high profile Maldivian dissident, Qasim Ibrahim, has also been granted bail and returned home last week from Europe where he lived in exile after obtaining prison leave for medical treatment.