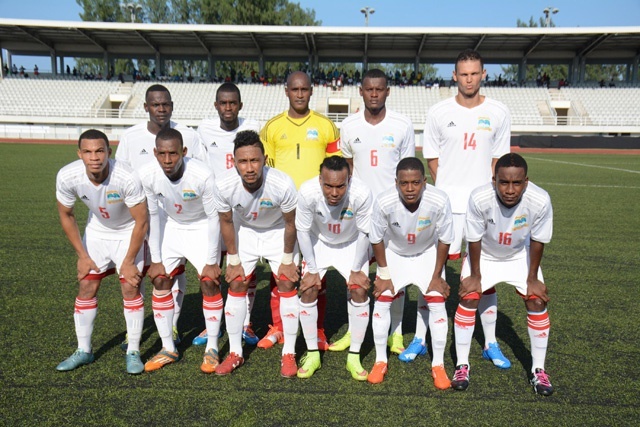 The team ahead of the qualifying match for the African Cup of Nations (AFCON) 2017 against Lesotho. (Joena Bonnelame, Seychelles News Agency)

(Seychelles News Agency) - The Seychelles' national football team will face South Africa away from home in its next qualification match for the 2019 Africa Cup of Nations (AFCON) on Saturday.

The team from Seychelles, a group of 115 islands in the western Indian Ocean, has lost both of its first two matches -- 5-1 to Libya in June last year and 3-0 to Nigeria last month.

Coach Gavin Jeanne said the match against the South African Bafana Bafana will also be “a difficult one like all the matches we are playing in this group.”

The Seychelles Pirates, as the team is known at the international level, has been drawn in one of the toughest groups of the competition -- Group E -- which is composed of Nigeria, Libya and South Africa.

Jeanne said he had to make several changes to the team that played against the Nigerian Super Eagles.

“Some of our regular players have injuries so we have made some changes to replace them. It has not been possible to have the same team that played against Nigeria,” he told SNA.

Seychelles is at the bottom of Group E with no points. South Africa is in second place with 4 points, the same as Libya, which is leading the group with a better goal differential.

In an interview with The Citizen news agency in South Africa, coach Stuart Baxter said his players have learnt from their mistakes and they will not underestimate Seychelles when they host them at the FNB Stadium on Saturday.

“We were all off the mark on Cape Verde because we thought they were a small team but it was only in stature that they are small but they have quality players. I think in this game we should not have any other thoughts in our minds. We want the six points and we will not underestimate anyone. We will play as well as we can,” coach Baxter was quoted as saying.

After playing South Africa on Saturday, the Seychelles’ national team will again face the Bafana Bafana on Tuesday, October 16 on home turf.

The group stage of the Africa Cup of Nations started in June last year and only the top teams and the three best runners-up from the 12 groups will join host Cameroon in the finals in 2019.

Sport » Be a reporter: Write and send your article » Subscribe for news alert
Tags: 2019 Africa Cup of Nations, FNB Stadium