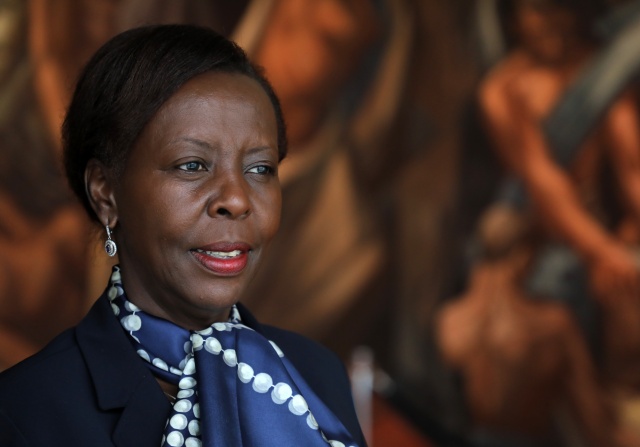 (AFP) - Rwanda scored a major win Friday with the election of its foreign minister to head a global association of French-speaking nations, as it seeks to boost its influence on the continent and further afield.

A tiny nation with a tumultuous history, whose name has long conjured images of bloody genocide, Rwanda has undergone a dramatic turnaround in recent decades but remains dogged by criticism of rights abuses and lack of political freedoms.

Nevertheless, and despite prioritising English as its language of education a decade ago, the country's top diplomat, 57-year-old Louise Mushikiwabo, was elected to the head of the International Organisation of La Francophonie (OIF).

"This represents a new chapter in relations between Rwanda and France. Rwanda is looking at the bigger picture and wants to have more influence on the global stage by opening up a wider relationship with Francophonie countries," said Buchanan Ismael, a senior lecturer in political science at the University of Rwanda.

Mushikiwabo, who visited dozens of countries to campaign for support, received the backing of the African Union as well as the crucial support of France.

Her election is a victory for both Rwandan strongman Paul Kagame and French President Emmanuel Macron, who have sought to improve relations between their two nations, long fraught due to Kigali's accusations of French complicity in the 1994 genocide that killed at least 800,000, mostly Tutsis.

Mushikwabo's nomination came as a surprise to the OIF, after Rwanda in 2008 replaced French with English as the language of education, and joined the Commonwealth a year later.

However, Mushikiwabo told AFP during an interview in July that the idea Rwanda was rejecting French was a "misinterpretation", arising from tense diplomatic relations between the two countries.

She said her term as foreign minister had seen a swing back to "our Francophone, central African heritage" as Rwanda realised the benefit of strong ties with both the Anglophone and Francophone world.

Mushikiwabo's victory is a big political score for Rwanda, which has slowly been expanding its influence on the continent.

"Seeking the leadership of the Francophonie is clearly part of Rwanda's goal for a greater continental and global role," said Elissa Jobson who researches the African Union (AU) for the International Crisis Group think tank.

"It's a significant move given Rwanda's frosty relations with France, its adoption of English as the country's main language and its admission to the Commonwealth."

Kagame, who is credited with stopping Rwanda's genocide and turning around his country's economy, has brushed off criticism of rights abuses and authoritarianism to become one of Africa's most powerful and internationally-admired leaders.

His counterparts, inspired by Rwanda's turnaround, have tasked him with reforming the AU.

Rwanda is also pushing to become the first African nation to join the Organisation for Economic Cooperation and Development (OECD), an elite club of the wealthiest economies on the planet.

Rwanda is seeking to position itself as a regional hub with massive investments in its national airline Rwandair, and the construction of a sprawling convention centre in Kigali which in March hosted the AU general assembly.

"I am very proud that my country is present across the world, and not only the continent. We were already there, but we have moved into high gear," said Mushikiwabo.

As head of the OIF, one of Mushikiwabo's major tasks will be promoting human rights, yet her government is regularly accused of crushing opposition and dissent.

Two latest detailed reports by Human Rights Watch published last year showed that summary executions are carried out in Rwanda by both the police and the army, with the military also accused of using torture.

In July, the UN Subcommittee on Prevention of Torture cancelled a visit to Rwanda for a second time, accusing Kigali of a lack of cooperation.

In the run up to the Francophonie vote, opposition leader Victoire Ingabire was unexpectedly freed from jail, and government critic Diane Rwigara was granted bail in an ongoing trial after a year in prison.

While rights groups criticise Rwanda, foreign allies often praise its economic performance and Kagame's vision, and Jobson said she doubts these concerns will impact its ambitions.

"International criticism of Rwanda's domestic politics has long been muted. It is a good development partner and it is one area of stability in a unstable region."