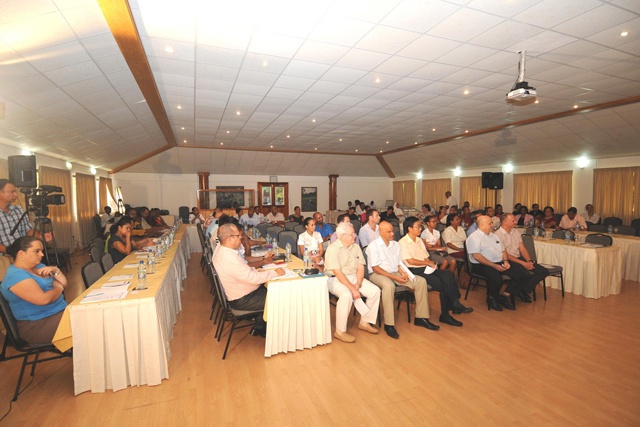 Media representatives, members of parliament and guests at the opening of the workshop (Joena Bonnelame, Seychelles News Agency)

(Seychelles News Agency) - How much do Seychelles parliamentarians really know about news reporting and to what extent do journalists giving coverage to parliamentary work know about the proceedings of the institution?

These were amongst issues which both sides were able to shed some lights on during a day long discussion aimed at better understanding each other’s roles and responsibilities.

The workshop on ‘Parliament and the Media’ was organized by the National Assembly of Seychelles and the Inter-Parliamentary Union, (IPU).

“While it is true that the parliament and the parliamentarians, as representatives of the people, possess ultimate legitimacy, it is as equally true that the media plays a decisive role in shaping public opinion. It is the media after all which assists the community in their decision by providing the public with information about the actions and opinions of parliamentarians,” said the Speaker of the Seychelles National Assembly Dr.Patrick Herminie at the beginning of yesterday’s session stressing that there is still room for improvement in the way parliamentary work is covered by the media.

Television, radio, print and internet based journalists practicing in Seychelles were then given the opportunity to engage in direct and frank discussions on a wide range of subjects relating to their respective work.

Lack of comprehension of their different roles and responsibilities

While members of the National Assembly felt that their work as parliamentarians are not being given due coverage and have the perception that journalists are more concerned with the executive branch of the state by giving more prominence to government ministers for example when reporting on question time sessions, journalists on the other hand felt that assembly reporting is perceived as boring and that parliamentarians do not know much about the news process.

Present to guide the discussions and share their expertise and experience were the Chief Public Communications Officer of the Kenya Parliament Japhet Muthomi, Claire Doole a former BBC correspondent who has done parliamentary reporting even at the European Union level and there were also interventions by the Chairperson of the Seychelles Media Commission Ibrahim Afif.

Balanced and fair reporting, ethics and the media, the need to know how the media operates and to understand what is news, the need for journalist to understand parliamentary terms like first,second and third reading, the need for the media and the parliament to have a relationship based on mutual respect were only some of the wide range of issues addressed.

The Seychelles National Assembly normally meets on Tuesdays for question time sessions which usually see a particular minister addressing questions put forward by the MP’s, the parliament also considers motions and approve national budgets and legislations. There are also instances of extraordinary sittings especially during the visit of dignitaries to the archipelago, like during the recent visit of the Cabo Verde President in June.

Parliamentarians also form part of several committees put together for example the finance and public accounts committee, the committee on government assurances amongst others.

The national broadcaster Seychelles Broadcasting Corporation (SBC) covers the question time session live on radio and television, have news items on particular issues that are deemed newsworthy and there is also a one hour programme on Fridays on the week’s session.

Seychelles, which has a population of 90,000, has two daily newspapers, 1 tri-weekly and 3 weeklies, 3 radio stations including the island’s first privately-owned radio station, 1 national television station and a recently launched news agency, the Seychelles News Agency.

Aside from the SBC, the other media houses choose if or how they wish to give coverage to the work of the assembly based on what they feel is news worthy.

Speaking to SNA, Kevin Malbrook, SBC journalist said “In general it’s good we had this meeting, because if the first meeting we have had this clash and confusion with each speaking another language, after a second and third meeting maybe we can come to a consensus on how things should evolve.”

When addressing the issue of parliamentary reporting being seen as 'boring', Malbrook who has been reporting on assembly proceedings for a good number of years said this was due to a lot of repetitions with members going back and forth addressing the same issue during debates on particular topics that he says at times can be left for intervention by only members who are well versed in the field.

He nevertheless agrees with the view that journalists should receive more training on parliamentary reporting an issue which was brought up several times during the meeting.

“Journalists should always have more training and we need to have people specialized in reporting on parliament,” he said.

The Secretary of the newly set up Association of Media Practitioners, AMPS, Tessa Henderson also representing the Civil Society said that since the association is paying immediate attention to training in various fields parliamentary reporting will surely be included to ensure that journalists from all media houses in the country can benefit.

Both the leader of government business in the Assembly, Marie Antoinette Rose and the leader of the opposition in the Assembly David Pierre said that the workshop has helped both sides to understand each other a little bit better and have achieved the objective of getting parliamentarians and journalists to sit around the same table and address their differences.

“I believe the debate was important. I have worked in the media before and now I work in parliament so I understand that very well. I believe that it was important that the members understand how the relationship works (…) it’s a relationship that will never be perfect, media its important they have their way of operating and parliament is also independent with its own way of doing things. I believe we need to find the common grounds,” said Rose.

During the discussions there was a lot of focus on how the national broadcaster SBC provides coverage and much less on other media.

Former BBC correspondent Claire Doole also an independent consultant who will be compiling her thoughts on the meeting which will be considered when the final recommendations are being drawn up, says parliamentary reporting takes a lot of experience and understanding.

While the focus was on how the different media can improve coverage of parliamentary work it was pointed out during the meeting that the National Assembly itself can do a lot of its own reporting through their website or on social media, or should consider having a dedicated channel for example when such becomes available as the SBC migrates from analogue transmission to digital TV which will provide for more channels.

The speaker of the National Assembly also signalled plans for the institution to have its own broadcasting unit in the future.