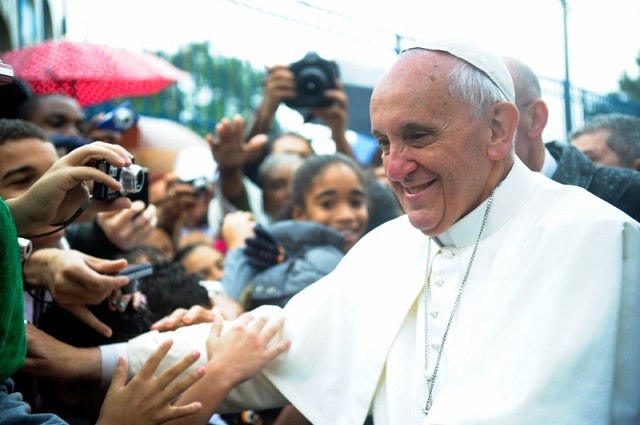 Pope Francis on his visit to Brazil in 2013. (Agência Brasil, Wikimedia) Photo License: CC BY 3.0 BR

(Seychelles News Agency) - The Bishop of the Roman Catholic Diocese of Seychelles says he hopes that that Pope Francis will visit the island nation in 2019.

The Conference of Bishops of the Indian Ocean (CEDOI) – regrouping bishops from Reunion, Mauritius, Rodrigues, Seychelles and Comoros – have received information that the pontiff is expected to visit Madagascar next year.

If this happens, Pope Francis will be the second head of the Catholic Church to visit the islands after Pope Jean-Paul II visited the Seychelles, an archipelago of 115 islands in the western Indian Ocean, in 1986.

"We would like him to come to the Seychelles, but you know, the pope cannot go to all the small countries," Bishop Denis Wiehe of Seychelles told SNA on Thursday.

CEDOI has started negotiations with the Vatican but up to now, nothing concrete has been decided.

Pope Francis, an Argentinian, is the 266th and current Pope and sovereign of the Vatican City State. Francis is the first Jesuit pope and the first pontiff from the Americas. Pope Francis, whose papacy began in March 2013, replaced Benedict XVI, who served from 2005 until his resignation in 2013.

According to Wiehe "members of the CEDOI are expected to go to Rome in November and we hope during this visit to know more about the planned visit of the Pope."

The Reunion newspaper the Clicanoo has quoted Bishop Gilbert Aubry, Bishop of Reunion Island – a French department in the Indian Ocean – saying "the visit could be done in August, but it remains to be confirmed. The exact dates will be known in November.”

Seychelles has a population of about 95,000 and according to the National Bureau of Statistics, 76 percent of the population of Seychelles are Roman Catholic, 6 percent are Anglican, 2.4 percent, Hindu and 1.6 percent Muslim, as well as others of different faiths.

During his five-hour stopover in Victoria, the capital city, the pontiff celebrated mass. Thousands braved the rain to attend the mass in the Popular Stadium. Seychellois priest Gustave Lafortune composed a special song to coincide with John Paul II's visit.

Pope John Paul II, a native of Poland, served as Pope and sovereign of the Vatican City State from 1978 to 2005. He was one of the most travelled world leaders in history, visiting 129 countries during his pontificate.

General » Be a reporter: Write and send your article » Subscribe for news alert
Tags: Conference of Bishops of the Indian Ocean, Roman Catholic Diocese