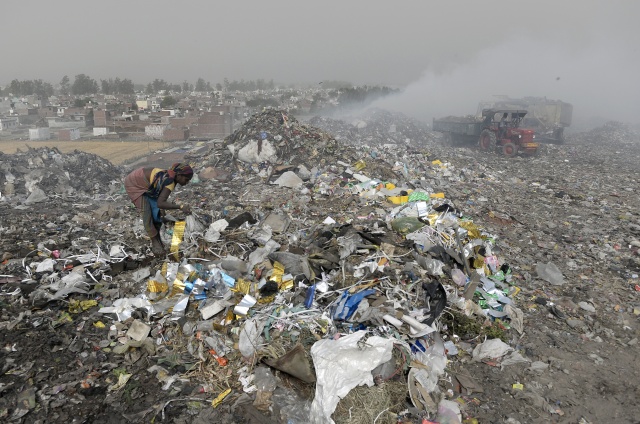 (FILES) This file photograph taken on May 5, 2018, shows Indian rag pickers at work in a landfill site full of plastic bags on the outskirts of Jalandhar. Avoiding global climate chaos will require a major transformation of society and the world economy that is "unprecedented in scale," the UN said October 8, 2018, in a landmark report that warns time is running out to avert disaster. (SHAMMI MEHRA / AFP)

(AFP) - Delhi's biggest coal power plant was set to shut down Monday as a new emergency plan to improve air quality in one of the world's most polluted cities came into force, Indian officials said.

Under the new strategy, restrictions on construction sites and traffic will be imposed depending on the air quality in the megacity of some 20 million people.

When the air is classed as "poor", as it was on Monday, authorities will ban the burning of garbage in landfills as well as fire crackers and certain construction activities.

When it reaches "severe+", a new category, authorities will stop the entry of trucks except those with essential goods and regulate the number of cars on the road.

The Badarpur thermal plant was due to permanently close on Monday because of its high contribution to pollution in the city.

Cooler air traps pollutants -- such as from vehicles, building sites and farmers burning crops in regions outside the Indian capital -- close to the ground.

Authorities in the sprawling city attempted to implement similar measures last winter but to little avail.

This is partly because authorities are powerless to prevent some sources of pollution.

"Our aim is to stop the air quality from deteriorating further though certain factors are out of our control such as crop burning, wind speed and lack of public transportation," environment authority official Bhure Lal told AFP.