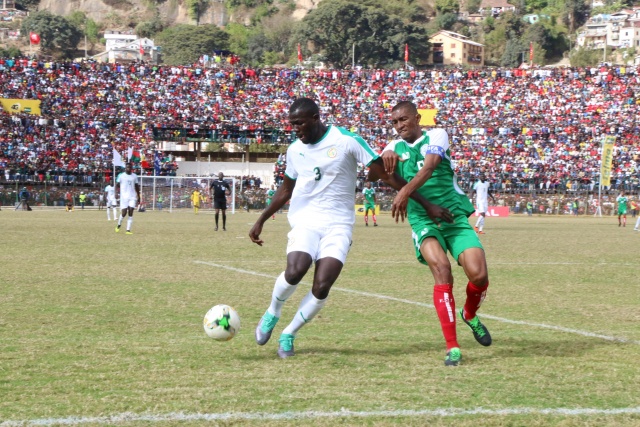 (AFP) - Madagascar will book a place at the Africa Cup of Nations tournament for the first time if they defeat visiting Equatorial Guinea on Tuesday.

Form favours the Malagasy as they edged their Group A opponents 1-0 away two days ago thanks to an early goal from France-based Faneva Andriatsima.

He was among 10 foreign-based starters for Madagascar with defender Tobisoa Njakanirina from perennial domestic champions CNaPS Sport the exception.

Frenchman Nicolas Dupuis coaches the team from the huge Indian Ocean island and has steadily transformed them from whipping boys to competitive opponents.

That much was evident last month when they twice came from behind against 2018 World Cup qualifiers Senegal in Antananarivo to force a 2-2 draw.

The top-of-the-table clash was staged against the tragic backdrop of a pre-match stampede outside the national stadium which left one supporter dead and 41 injured.

A consequence was that Madagascar must play their next three home matches away from the Mahamasina Stadium and will face the Equatoguineans in Vontovorona.

"We have learnt many lessons from that sad occasion and there will be no recurrence," interim Malagasy football chief Doda Andriamiasasoa assured reporters.

Senegal and Madagascar have seven points each, Equatorial Guinea three and Sudan none halfway through their six-round qualifying group.

If Madagascar gain maximum points, and Sadio Mane-inspired Senegal completed a double over Sudan by winning in Khartoum later the same day, both will qualify.

Although Senegal outclassed Sudan in Dakar en route to a 3-0 victory, they are likely to find the sauna-like conditions in east Africa a challenge after limited acclimatisation.

Algeria, Zimbabwe, Guinea, the Ivory Coast, Tunisia, Egypt and Uganda are other countries who could clinch qualification with two matchdays to spare.

There are no strings attached for Algeria and Tunisia, the top ranked African team, as they will succeed by winning away to Benin in Group D and Niger in Group J respectively.

Goals from Ramy Bensebaini and Baghdad Bounedjah gave Algeria a 2-0 home victory over Benin last Friday, 24 hours before Tunisia laboured to a 1-0 win against Niger.

Should Tunisia win again, 2017 Cup of Nations runners-up Egypt will join them at the finals provided they complete a double over eSwatini in Manzini having won 4-1 at home.

Guinea and the twice champions the Ivory Coast can wrap up the Group H slots by winning in Rwanda and the Central African Republic (C.A.R.) respectively.

After missing the World Cup in Russia, the Ivorians displayed improved form in a 4-0 romp over the C.A.R. with Manchester United defender Eric Bailly among the scorers.

Should Zimbabwe overcome the Democratic Republic of Congo again, this time in Harare, they will qualify if Liberia and Congo Brazzaville draw the other Group G match in Paynesville.

For Uganda to secure a second successive qualification, they must defeat Lesotho in Maseru and hope Tanzania do not take maximum points off Cape Verde in Dar es Salaam.

A 21-fixture schedule this Tuesday completes matchday 4 and the remaining two series of fixtures are set for November and March ahead of the June 15 to July 13 tournament.