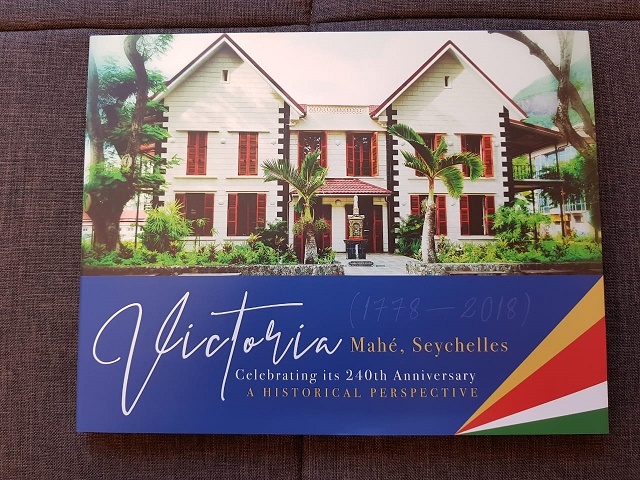 The book -- Victoria: Celebrating its 240th anniversary A Historical perspective’ -- is a collection of rare and resourceful pictures and texts. (Rassin Vannier, Seychelles News Agency)

(Seychelles News Agency) - A new book that is the first to recount the evolution of Victoria – the capital city of the Seychelles - was officially launched last Friday.

‘Victoria: Celebrating its 240th anniversary A Historical perspective’ is a collection of rare and resourceful pictures and texts which tell the story of Victoria from when it was established as a French settlement in 1778 to date.

The book is a collaboration between the mayor of Victoria, David Andre, historian Tony Mathiot, and editor and publisher Georgina Dhillon.

The book, published to commemorate the 240th anniversary of Victoria, took over a year to produce. It was financed jointly by the Ministry of Finance and the publisher.

Many books have been written about the history of Seychelles, mostly by non-Seychellois. Such books offer testimonies and accounts of the country’s historical journey. Yet there has never been a book specifically about one of the smallest capital cities in the world: Victoria.

"We made it a photographic journey that is affordable for everyone, for students and adults so they can know their town through photos and text also. What makes this book exceptional is that there are photos that people have never seen,” explained Mathiot, the main author of the book.

Mathiot is a well-known historian in Seychelles that does continuous and intensive research about the history of Seychelles – a group of 115 islands in the western Indian Ocean. The compiling of the information was done with the support of other persons interested in the issue such as Seychellois anthropologist Jean Claude Mahoune.

“One of my personal prides is the ordinance that established the town of Victoria in 1851. Nobody in Seychelles has ever seen this law. I personally went to Mauritius in April, I looked at documents in the Coromandel archive. It is such an important document that I felt it was a must for it to feature in the book,” said Mathiot.

The book shows the evolution of Victoria from ‘Etablissement du Roi’ to current day, a town with modern façade with beautiful architecture - some built on reclaimed land.

According to Andre, the book amplifies the value of the town as it celebrates a significant anniversary. “It is an opportunity to reminisce, appreciate and above all enjoy a wonderful journey as you go through the rich pages of the book. This book is a beautiful treasure to share with family members including children, friends and visitors as a celebration of our beautiful enchanted creole capital,” said the Mayor in his speech to launch the book.

“I hope that this publication will help to contribute towards a new and refreshing breath of life and initiative that will promote and respect our heritage and pave the way for well-considered culturally relevant and eco-friendly developments in Victoria,” Andre added.

The initiative for the book came from the previous mayor of Victoria – Jaqueline Moustache-Belle, who could not realise the project due to financial constraint.

In fact, finance along with publishing were also constraints but fortunately, the idea was warmly endorsed by Georgina Dhillon who is the respected publisher of the ‘Kreol’ magazine under RILA Publications in the United Kingdom.

“History is disappearing in many parts of the world, it is disappearing in the US as I see it. But the Seychelles has got an energy, has got a passion, they do the same thing to their buildings. It looks very beautiful, it’s changed and it’s still growing. What makes me feel really honoured about this is that I am part of this journey, I am part of history and I hope to continue,” said Dhillon.

The book is on sale at approximately $44 in all bookshops across the islands.