DRC Ebola outbreak not global emergency 'at this time': WHO 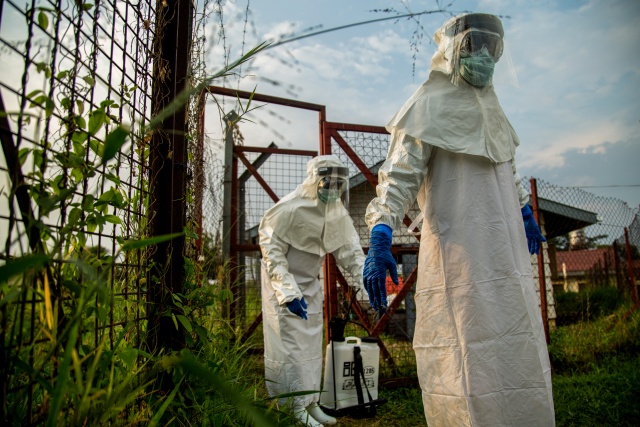 (AFP) - A deadly Ebola outbreak in eastern Democratic Republic of Congo is deeply worrying, but does not yet merit being labelled a global health emergency, the World Health Organization said Wednesday.

"Based on the current context... the committee recommended that the current Ebola outbreak in DRC does not constitute a public health emergency of international concern," said WHO chief Tedros Adhanom Ghebreyesus.

"I have accepted the recommendation of the committee," he told reporters in Geneva following a meeting of the UN agency's International Health Regulations Emergency Committee.

In the WHO's parlance, "a public health emergency of international concern" is an "extraordinary event" in which a disease may spread across borders and requires a vigorous international response.

Tedros stressed though that the decision not to use the label for the epidemic that has killed at least 139 people in DRC's violence-torn North Kivu region since August "does not mean that WHO is not taking the outbreak seriously."

"We will not rest until the outbreak is finished," he said, voicing hope that the robust response already in place could halt the spread of the virus "within this year".

Robert Steffen, Chair of the Emergency Committee, also voiced "some optimism" that the outbreak would be brought under control within a "reasonable time".

He told reporters though that the committee still has great concerns about the outbreak, and stressed that if the situation worsens the WHO could still decide to declare a global emergency.

The latest outbreak -- the 10th in DR Congo since Ebola was first detected there in 1976 -- emerged in the highly-restive northeastern region of North Kivu, which is home to a clutch of armed groups.

So far, 216 cases have been reported, including 181 that have been laboratory confirmed. A total of 139 people have died, meaning the fatality rate stands at 64 percent, WHO said.

The violence is complicating the response, and making it difficult to track contacts of those infected with the highly contagious virus.

The area, near the Ugandan border, is also densely populated and nine neighbouring countries have been advised that they are at high risk of spread.

Fears and misconceptions about the virus have led to widespread mistrust and resistance to Ebola response workers, including those who come into communities wearing hazmat suits to orchestrate burials.

"The emergency committee had a consensus that this outbreak certainly is not an outbreak of global importance, but they are very concerned for the region," Steffen said.

The committee determined though that DRC authorities and the international community were already responding robustly to the outbreak, and that Uganda was well-prepared if the virus spreads across the border.

The use of an experimental vaccine is also promising, with more than 18,000 people having received the jab to date, WHO said.

"I think the vaccine is helping," Tedros said.