A look at 6 gifts given to President Faure of Seychelles 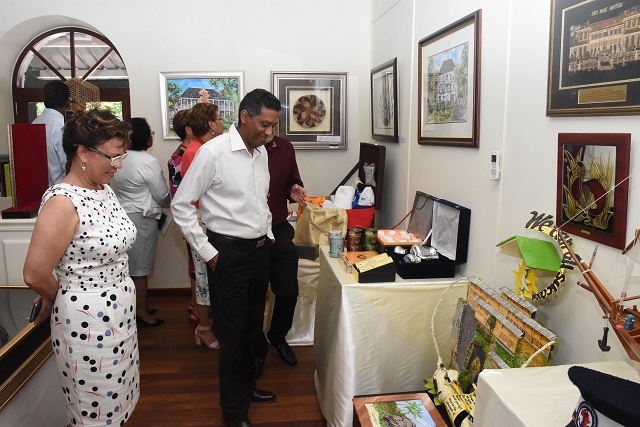 (Seychelles News Agency) - A new exhibition in Seychelles showcases gifts given to President Danny Faure over the last 12 months. The gifts were given by heads of state and dignitaries as well as by local and international organisations. The exhibition is open weekdays from 9 a.m. to 4 p.m. at the mayor’s office, which is located along State House Avenue in Victoria, the capital.

SNA looks at some of the gifts received in high-level visits and overseas missions.

President Faure made a state visit to India at the invitation of President Ram Nath Kovind in June. In India Faure passed through Ahmedabad in Gujarat where he visited the Indian Institute of Management and the Gujarat Forensic Sciences University and the Indian Naval Air Station in Goa.

Private meeting with President of Rwanda

Faure met President Paul Kagame of Rwanda at State House during his private visit to Seychelles in August. The Rwandan President is also the chairperson of the African Union.

Official visit of President of Botswana

The President of Botswana, Mokgweetsi Masisi, met Faure in a presidential tête-à-tête during his one-day official visit to Seychelles in May. Masisi was on a tour of the member countries of the Southern African Development Community (SADC).

A gift received at the 38th Southern African Development Community (SADC) summit of heads of states and government in Windhoek, Namibia from 17-18 August.

Faure joined other world leaders at the 25th meeting of the Commonwealth Heads of Government Meeting (CHOGM) in London from April 16 to 20.

President Faure attended the 2018 Forum on China-Africa Cooperation (FOCAC), a meeting which normally takes place every three years since its inception in 2000.