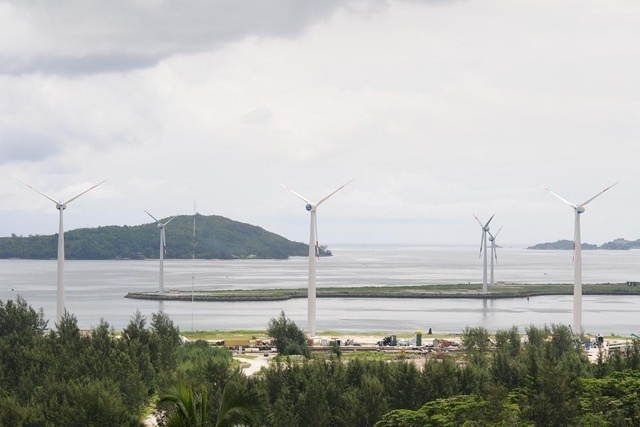 Wind turbines on Romainville Island where two solar projects producing one and five megawatts of electricity will be built. (Patrick Joubert)

(Seychelles News Agency) - A first draft of a proposed policy on energy efficiency in Seychelles with clearer guidelines on how to provide at least 15 percent of the island nation's energy needs from renewable sources by 2030 was presented in a two-day workshop.

The policy will help Seychelles to attain its renewable energy goals, Theodore Marguerite, the principal policy analyst for energy at the Ministry of Environment, Energy and Climate Change, said at the end of the workshop on Wednesday.

“Drafting the first-ever energy efficiency policy is a start in the right direction. It is important for us to know how we can use clean energy that will make the Seychelles economy less dependent on fossil fuel to produce electricity,” said  Marguerite.

Marguerite said that the 2.5 percent is expected to increase to 5 percent in the coming three years with several renewable energy projects.

Two solar projects that will produce one and five megawatts of electricity respectively are expected to be built on the man-made Romainville Island close to the main island of Mahe through a $3.4 million grant from the Indian government.

Seychelles is also planning to install Africa’s first utility-scale Floating Solar Photovoltaic (PV) system on the lagoon at Le Rocher, in the district of Les Mamelles.

Speaking to SNA after the workshop, Radley Webber, who is involved in renewable projects, said that the policy is a good initiative to start with, but it needs to give a good projection of the population energy consumption by 2030.

“Basically, if we look at hotels, they use a lot of energy through air-conditioning. Therefore, we also need to look closely at tourism figures to give us an idea of our energy consumption in the future,” he said.

The policy is also taking into account the future development of government infrastructures and housing projects and how it can be done to accommodate renewable energy facilities.

“Often time we are looking at complicated solutions when we need simple measures such as building houses with proper insulation and roofing that is more solar panel friendly,” said Andre Jean-Louis, a participant at the workshop.

Jean-Louis said that the policy lacks clear objectives and it needs to look at different sectors and how they are consuming energy.