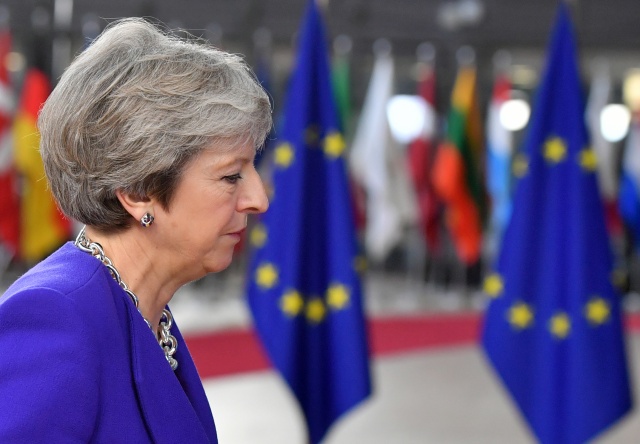 Britain's Prime Minister Theresa May arrives at the European Council in Brussels on October 18, 2018. European Union leaders meet for a summit focused on migration and internal security, after reviewing the state of the Brexit negotiations with Britain.
(Emmanuel DUNAND / AFP)

(AFP) - Prime Minister Theresa May confirmed Thursday that Britain would consider extending the transition period after Brexit for a few months if needed to agree a new trade deal with the EU.

EU negotiator Michel Barnier raised the idea as a way of breaking the deadlock on how to keep Britain's border with Ireland open after Brexit, the key issue holding up the divorce talks.

But May emphasised she did not expect the extension beyond the current date of December 2020 to be needed, amid anger among eurosceptics at home that Britain could be tied to the EU indefinitely.

Arriving for a second day of summit talks in Brussels, May noted that both sides remained at odds over a "backstop" plan to avoid frontier checks in Ireland if and until a new trade deal could be signed.

"A further idea that has emerged -- and it is an idea at this stage -- is to create an option to extend the implementation period for a matter of months," she said.

"But the point is that this is not expected to be used, because we are working to ensure that we have that future relationship in place by the end of December 2020.

"I'm clear that it is possible to do that (deal) and that is what we are working for.

"And in those circumstances there would be no need for any proposal of this sort and I'm clear that I expect the implementation period to end at the end of December 2020."

The possibility of an extension made front-page news in Britain on Thursday and some eurosceptic MPs warned they could not accept such a plan.

The top-selling The Sun tabloid warned it was "an outrageous non-starter".

"Unless she can give a date when we will leave the EU and ALL its major institutions she cannot claim to have fulfilled the referendum vote" in 2016 for Brexit, it said in an editorial.

General » Be a reporter: Write and send your article » Subscribe for news alert
Tags: Brexit, UK, May