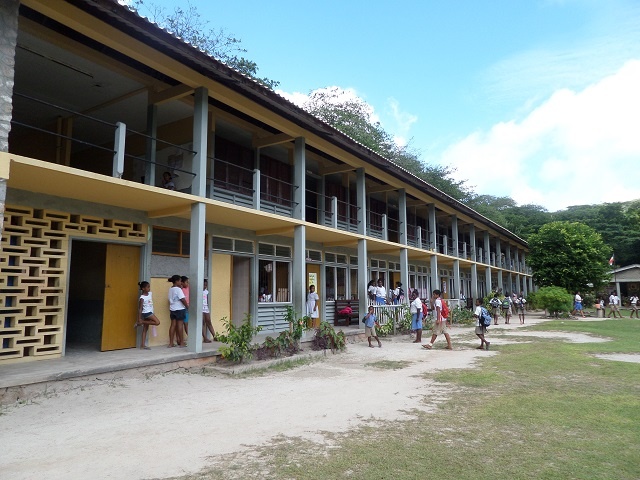 The 171 test subjects are from four primary schools in the country and included La Digue where the lifestyle of its inhabitants might be different from that of Mahe. (Elke Talma) Photo License: CC-BY

(Seychelles News Agency) - One out of every two children between eight to ten years old in Seychelles is obese as a result of low physical activity and poor diet, a new scientific study shows.

The grim assessment on child health was shared during a presentation of a study carried out by the Seychelles’ Ministry of Health in collaboration with the United Nation’s International Atomic Energy Agency (IAEA) on Thursday.

Called the ‘Assessment of Childhood Obesity’, the study showed that in the food patterns of the school children at the top is sugar-sweetened beverages at 72 percent and at the bottom is water at 8 percent.

The study also showed that 57 percent of the children watched television and 28 percent played electronic devices such as video games, laptop and tablets on school days for at least 2 hours per day. This is above the recommended screen time of not more than 2 hours for children.

“We were not thinking of getting such a result. There needs to be more monitoring and we have to educate the population better so that the people can change their lifestyle,” said Juddy Jean-Baptiste, a nutritionist at the Health Care Agency.

Overweight and obese children are likely to stay obese into adulthood and more likely to develop non-communicable diseases like diabetes and cardiovascular disease at a younger age.

The presentation showed that compared to eight other African countries that have done the study using the same technique, Seychelles has the highest number of overweight or obese children based on the amount of fat content in their body.

The study was done using stable isotope deuterium dilution technique to measure body composition. The pupils drank a diluted solution of deuterium and later had their saliva tested. Using this method, the percentage of fat in the body can be calculated.

It is the first time that Seychelles is using such a method.  The Ministry of Health had always used the Body Mass Index (BMI) method which is calculated based on the height and weight of a person.

“BMI is very good to be used in the population for routine and to use the WHO (World Health Organisation) as standards to measure obesity, but the message is that you don’t know how much fat there is in the body,” said Victor Owino the nutrition specialist from the IAEA Headquarters.

The 171 test subjects are from four primary schools in the country and were chosen based on the result of the last BMI study carried out among pupils in grade four. The study showed that one out of four children is overweight or obese.

Anse aux Pins, an eastern Mahe district, was chosen as recent research showed the school had the highest number of obese children whereas Baie Lazare, in the south, had the lowest number. The Independent school was chosen as a private school and La Digue school as it is located on another island where the lifestyle of its inhabitants might be different from that on the main island of Mahe.

The height, weight and waist circumference of each child was recorded and through a questionnaire, data were collected about the children’s diet and physical activity habits. A total of 41 children were given an accelerometer that measured their activity level.

Looking at the way forward the director of the Family Health Nutrition section at the Health Care Agency, Rosie Bistoquet, said that healthy lifestyles need to be promoted to combat childhood obesity. This can be done through better nutrition and exercise habit.

A comparative survey will be done with another batch of grade four school children for a period of six months. The batch will be divided into two groups -- the first will continue eating and exercising as per usual and the second will have to improve their diet and exercise for one hour twice per week.

The results will later be compared, helping the concerned ministries to come up with measures of intervention at the national level.

Targeting fruit flies in Seychelles to save melons, pumpkin and cucumbers