Honduran migrant 'caravan' resumes from Mexico to US: AFP reporter 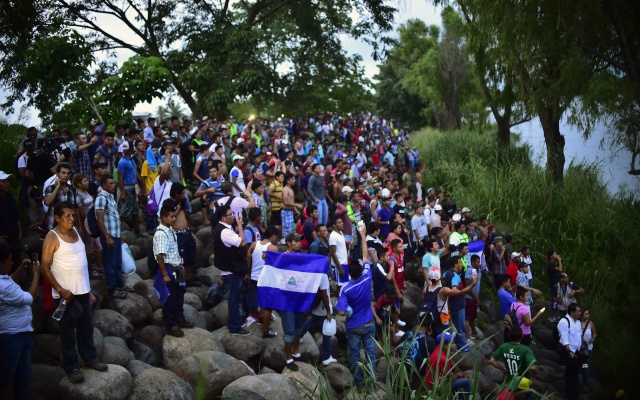 Honduran migrants heading in a caravan to the US, who have already reached Mexican soil, cheer at the rest of the group still waiting to cross at the Guatemala-Mexico border bridge, in Ciudad Hidalgo, Chiapas state, Mexico after crossing from Guatemala, on October 20, 2018. Thousands of migrants who forced their way through Guatemala's northwestern border and flooded onto a bridge leading to Mexico, where riot police battled them back, on Saturday waited at the border in the hope of continuing their journey to the United States. (Pedro Pardo / AFP)

(AFP) - Thousands of Honduran migrants resumed their march toward the United States on Sunday from the southern Mexican city of Ciudad Hidalgo.

Mexican authorities on Thursday had managed to block the "caravan" of migrants on a border bridge between Mexico and Guatemala, but many later entered via a river separating the two countries.

"No one is going to stop us, after all we've gone through, like crossing the river" said 21-year-old Aaron Juarez, who was accompanied by his wife and baby and was walking with difficulty because of an injury.

"We are tired, but very happy, we are united and strong," added Edwin Geovanni Enamorado, a Honduran farmer who was part of the caravan, who said he was forced to leave his country because of intimidation by racketeering gangs.

On Sunday morning, about a thousand migrants, including women and children, were still stranded on a border bridge hoping to enter Mexico legally via Guatemala.

The day before, the Mexican authorities opened the border to women and children who were then taken to a shelter in the city of Tapachula, about 40 kilometers (25 miles) from Ciudad Hidalgo, Mexico.

US President Donald Trump has been tweeting about the caravan's progress and thanked Mexican authorities on Saturday for their efforts to block it.