Trump says US will pull out of nuclear deal with Russia 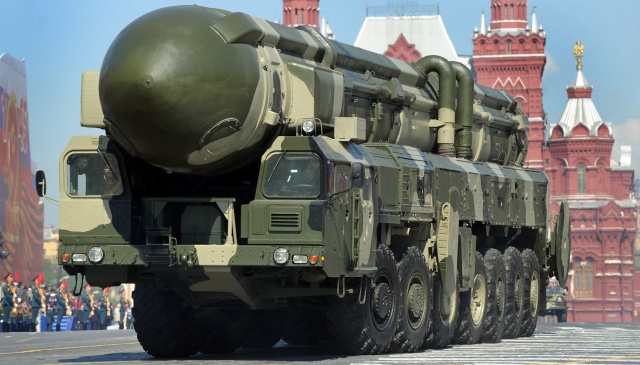 (FILES) This file photo taken on May 9, 2009 of a Russian Topol-M intercontinental ballistic missile driving through Red Square in Moscow in commemoration of the end of WWII. On March 26, 2010 the new US-Russia nuclear pact establishes a "legally-binding" linkage between offensive strategic weapons and missile defence systems, the Kremlin said. Russia and the United States announced on March 26 that they had sealed a new nuclear disarmament accord after months of protracted negotiations to replace the START treaty. (AFP PHOTO / DMITRY KOSTYUKOV)

The three-decade-old Intermediate-Range Nuclear Forces Treaty, known as the INF, was signed in 1987 by president Ronald Reagan.

"Russia has violated the agreement. They've been violating it for many years. I don't know why president (Barack) Obama didn't negotiate or pull out. And we're not going to let them violate a nuclear agreement and go out and do weapons (while) we're not allowed to."

Trump spoke as his National Security Advisor John Bolton was in Moscow to meet with Russia's Foreign Minister Sergei Lavrov, ahead of what is expected to be a second summit between Trump and Russian leader Vladimir Putin this year.

US-Russia ties are under deep strain over accusations that Moscow meddled in the 2016 presidential election, as well as tension over Russian support for the Syrian government in the country's civil war, and the conflict in Ukraine.

However, Washington is looking for support from Moscow in finding resolutions to the Syria war and putting pressure on both Iran and North Korea.

No new summit between Trump and Putin has been announced, but one is expected in the near future.

The two leaders will be in Paris on November 11 to attend commemorations marking the end of World War I.

A senior Trump administration official, who spoke on condition of anonymity, said another potential date would be when the presidents both attend the Group of 20 meeting on November 30 to December 1.