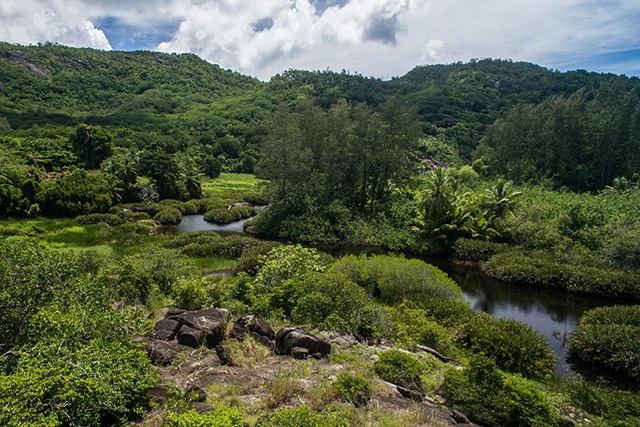 (Seychelles News Agency) - A new survey is being undertaken at the Grand Police beach to assess the biodiversity of fauna and flora as well as define protection and conservation measures for the area.

The Marine Conservation Society of Seychelles (MCSS) - a not-for-profit organization - will be doing the survey following a decision by the Cabinet of Ministers last year to maintain the area as a protected zone.

“This is the last wilderness area of the inner islands. It has been off limits to the general public for 30-plus years, so the biodiversity of this area is very special indeed,” said David Rowatt, director of MCSS. The details of the project were presented to the Takamaka community earlier this month.

Last year there was a general outcry when it was announced that there were plans to have a tourism development at Grand Police bay located in the Southern district of Takamaka -- on the main island of Mahe.

A march was held and a petition was launched with 7,500 signatures, which was submitted to the head of state.

After the cabinet decision, MCSS conducted a ‘wetland biodiversity assessment’ of the wetland at Grand Police to create an inventory of the different biodiversity that exists in the wetland.

MCSS in collaboration with the Ministry for Environment, Energy and Climate Change will now implement a project to conduct a survey of the whole area.

“The area that we had done the assessment on was just the wetland, and the area which ended up being talked about was the whole land that goes from the beach to the top of the mountain as well as land nearby. So we went back to our donors and said that we are potentially looking at 200-plus hectares of land that needs to be assessed instead of only 47 hectares, so as to develop the management plan, biodiversity policy and a nomination file, all which have to be done before Grand Police becomes a protected area,” explained Rowat.

The new survey is being funded by the Critical Ecosystem Partnership Fund -- a global program that provides funding and technical assistance to not for profit -- organizations and other private sector partners to protect critical ecosystems.

“Our sponsor was keen to follow up, so we have now started to do the biodiversity assessment of the entire area and we have already done the mapping, and the first habitat survey,” said Rowat.

The director general for Biodiversity Conservation and Management Division in the Ministry of Environment, Marie May Muzungaille, told SNA on Friday that once the assessment is done, " the ministry will work on a nomination file for the designation of Grand Police bay as a protected area. The category will also be determined after the findings."

According to Rowat, a steering committee comprising of MCSS, Ministry of Environment, Energy and Climate Change and partners including the Grand Police Citizen’s Initiative have been set up.

Even though Grand Police is private property, the Ministry for Environment said that the area will remain protected. Last year it was announced that steps are being taken to engage with the relevant owners so that the parcel of land is returned to the government.

An important nesting beach for the green turtles, once the beach receives its status it will be a controlled area with park rangers to ensure its protection and conservation.

One of the largest and most pristine wetlands of the Seychelles – a group of 115 islands in the western Indian Ocean – is found at Grand Police bay. As such it is home to the two species of endemic, critically endangered and nationally protected terrapins ‘Torti Soupap’ as well as being a potential foraging area for sheath tail bats.

Ministry of Environment alarmed over new algae in Seychelles

In need of hotel rooms, Seychelles' gov't tells developers to begin projects or lose them