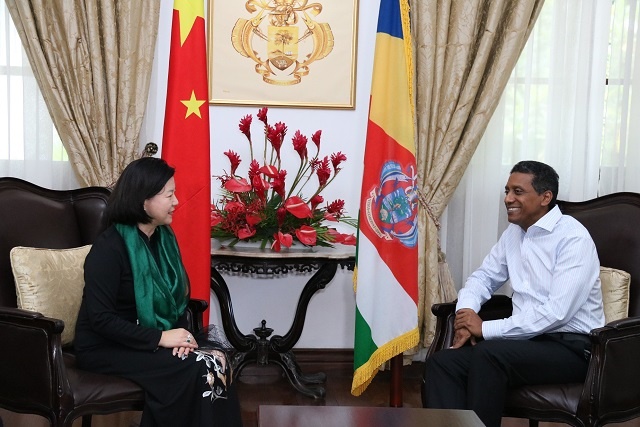 Guo Wei was accredited as the new ambassador of China to Seychelles on Tuesday. (Patrick Joubert)

(Seychelles News Agency) - Economic and commercial cooperation, as well as cultural and educational exchanges, are areas that Seychelles and China will deepen their bilateral relations in, said the newly accredited Chinese ambassador.

Guo Wei was accredited as the new ambassador of China to Seychelles on Tuesday in a short ceremony at State House, Victoria.

After presenting her credentials to President Danny Faure and calling on the Vice-president Vincent Meriton, Wei told the press that in-depth discussions about future cooperation between the two countries will be held at a later date.

Wei described Seychelles “as the pearl of the Indian Ocean, a paradise for tourists.”

“We will also be able to work in the tourism sector and in the protection of the environment. There is a lot that the two countries can do together,” said Wei.

Seychelles, an archipelago in the western Indian Ocean, and China established diplomatic ties in 1976, just after the 115-island archipelago gained its independence.

Tourism, health, defence, education and construction are some of the existing areas of bilateral cooperation between the two countries.

Over the past two years, relations between the two countries have progressed significantly.

In early September, Faure and his Chinese counterpart, President Xi Jinping, signed two Memoranda of Understanding. The first addressed cooperation between the two countries within the framework of the Silk Road Economic Belt and the 21st Century Maritime Silk Road Initiative. The second aims at improving cooperation within the maritime sector through a ‘Blue Partnership’.

Seychelles and China have also signed an economic and technical cooperation agreement which will provide for a new grant of $7.5 million to implement projects in the island nation.