Two countries with long coastlines, Seychelles and Mexico, to cooperate on education, culture 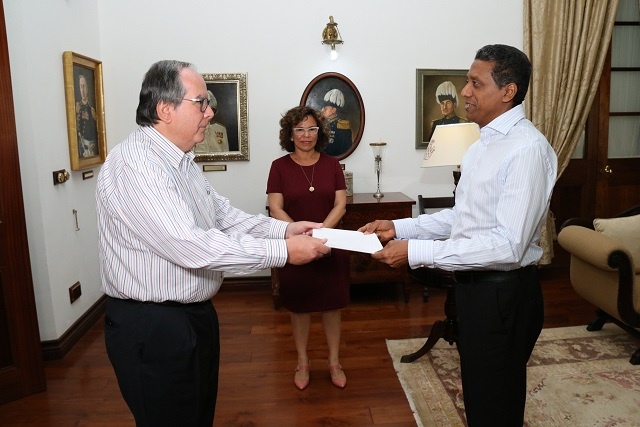 The Mexican ambassador presented his credentials to President Faure on Tuesday. (Patrick Joubert)

(Seychelles News Agency) - The newly accredited Mexican ambassador to Seychelles said he aims to improve and deepen existing bilateral relations between the two countries in the field of education, diplomacy and student exchange.

Erasmo Martínez, the new ambassador of Mexico to the island nation, made the statement at State House, Victoria on Tuesday after presenting his credentials to the Seychelles’ President Danny Faure.

Martínez told the press that the two countries are getting ready to sign an agreement on educational and cultural cooperation.

“The agreement needs to be sent to the competent authorities in Seychelles in the next few weeks to be signed. Once that is done, we really hope that we will have a new path to improve our exchange in education,” said Martínez.

Further discussion between Martínez and Faure revolved around tourism.

“Mexico has a well-developed tourism industry and Seychelles is a beautiful paradise. I am sure that a lot of Mexicans will try to make the most to come here. There is a large number of Mexicans going to East Africa and we need to do our best to connect Seychelles with that pattern that is already taking place in tourism for that region,” said Martinez.

Seychelles, with a population of 95,000, relies heavily on tourism, which is the top contributor to its economy.

Further topics of discussion between the Seychelles’ head of state and the Mexican’ ambassador revolved around migration and security.

Martinez added that as Mexico and the 115-island island archipelago both have huge coastlines and seas to take care of, it is of great importance that both countries contribute to making resources sustainable.

Seychelles and Mexico will be participating in the Sustainable Blue Economy Conference that will be held from November 26 to 28 in Nairobi, Kenya.

Martínez, who will be based in Nairobi, Kenya said that he hopes that he “will be in the post long enough to promote as much I can the already very good relation.”