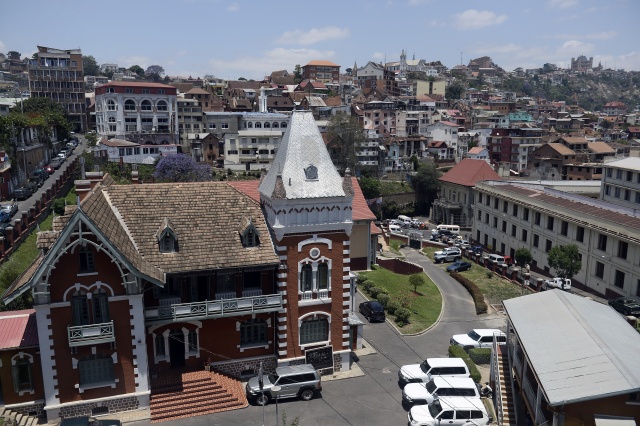 This picture shows the Electoral Court of Justice (L) which is also the Constitutional High Court in Antananarivo on October 24, 2013. Fifty-two people died in pre-trial detention in Madagascar last year as the country grapples with paralysis in its judicial system, rights group Amnesty International said on Tuesday. (AFP PHOTO / STEPHANE DE SAKUTIN)

It warned that 55 percent of the Indian Ocean island nation's prison population -- around 11,000 people -- were awaiting trial as of October 2017 despite many only facing allegations of minor crimes.

"The miserably poor conditions of detention in which pre-trial detainees are held clearly amount to cruel, inhuman or degrading treatment," said Amnesty's report titled "Punished For Being Poor".

Amnesty International's southern Africa director Deprose Muchena said that "a catalogue of failures in Madagascar's criminal justice system means people are suffering in prison for years before they have their day in court".

"In the prisons we visited, many of those being held for extended periods without trial were accused of petty, non-violent crimes. One man accused of stealing cattle had been in detention for three-and-a-half years."

The report said that many suspects are held on remand for years because of delays to court sessions which are only held twice yearly.

Amnesty visited nine prisons across the country and found "appalling living conditions" as well as inmates who were facing serious health problems.

"Pre-trial detainees, who were in visibly poor health during Amnesty International's visit, complained about not receiving timely or appropriate medical care. While most of the prisons visited had an infirmary, nurses, medical supplies and facilities were in short supply," said the report.

Shortages of food were also found to be an issue with the International Committee of the Red Cross reporting that almost half of prisoners in Madagascar suffer from moderate or severe malnutrition.

But he also admitted the country's prisons have "already passed the limit in terms of capacity and quality. No one has thought about investing in detention since independence" -- a situation he said needs to change.

Madagascar is heavily reliant on international aid and most people have not benefitted from modest economic growth with 76 percent living in extreme poverty.