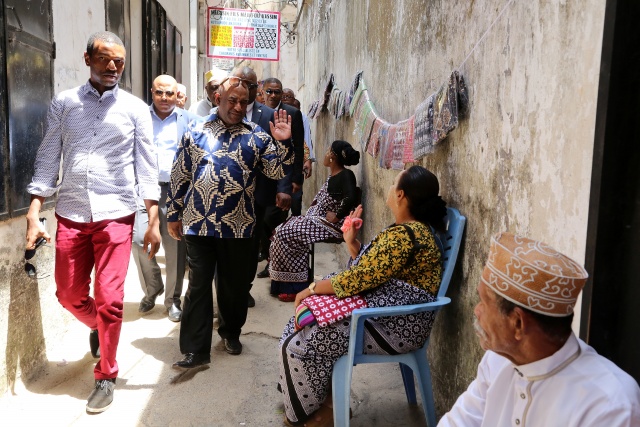 Comorian President Azali Assoumani (C) greets residents as he walks through the "Medina" of Mutsamudu on October 23, 2018 in Anjouan, Comoros. Officials in Comoros displayed weapons and ammunition allegedly recovered by security forces from rebel fighters who besieged part of Anjouan island's main city during a week of clashes. (YOUSSOUF IBRAHIM / AFP)

"I have come to see for myself. Nothing beats physically being on the ground," Assoumani, flanked by troops, said as he toured the medina, or old town, of the Anjouan capital Mutsamudu.

"I've seen normal life resume. Above all I want to congratulate the people of Mutsamudu for coping with the situation as well as our security forces, who have shown great professionalism," he said.

The army regained control of the densely populated medina on Saturday following the latest bout of instability to rock the coup-prone Indian Ocean archipelago.

At least two civilians were killed in a week of violence that pitted troops against Assoumani's opponents.

Assoumani told journalists that the priority was to "recover weapons and seek out rebels... who fled with their guns." He noted that an amnesty for rebel fighters to surrender their weapons without fear of prosecution was still in force.

Assoumani cut a calm figure, wearing a floral shirt and sunglasses and stopping to laugh with local shopkeepers and residents.

The rebel force was estimated to have numbered around 30, of whom 20 have been positively identified, according to a security source.

Following a deal between the national government and the island's authorities, controlled by the opposition Juwa party, Anjouan governor Abdou Salami Abdou was arrested on Sunday.

He is now under house arrest pending a court appearance but has denied any links to the rebels.

"I think it's regrettable that political leaders can be implicated in these incidents," Assoumani said.

Anjouan's chief prosecutor Mohamed Abdallah said the governor's case would be heard by a judge in the state security court.

"The charges are numerous: complicity in rebellion, disorder, possession of weapons, threatening territorial integrity," he said. "This won't be a political prosecution... just the application of law."

Assoumani won a widely criticised referendum in July allowing him to scrap the rotation of the presidency among Comoros' three main islands, disadvantaging opposition-leaning Anjouan, which was next in line.

The government had sent in reinforcements to quell the unrest in the old quarter of Mutsamudu after rebels erected barricades last Monday and repelled attempts by the security forces to regain control.

Over the past six days, many have civilians fled as a curfew was imposed and water and power supplies were cut.

The president, who came to power in a military coup and was elected in 2016, has indicated that he plans to stage polls next year which would allow him to reset his term limits and theoretically rule until 2029.