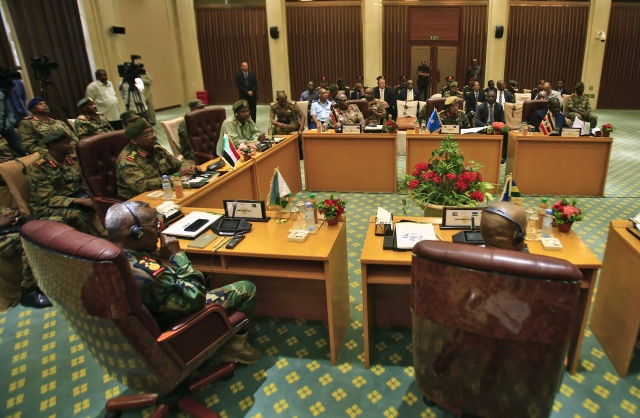 Chiefs of Staff of the Eastern and Central African States (IGAD) meet in the capital Khartoum, to discuss the deployment of the regional protection forces in Southern Sudan, on October 22, 2018. (ASHRAF SHAZLY / AFP)

Jeremiah Kingsley Mamabolo, the special representative of the United Nations and African Union in Darfur, noted that there were still confrontations between rebels and government forces in the mountainous Jebel Marra region despite a "relatively calm and peaceful" security situation elsewhere.

He said he informed the Security Council that "all efforts to bring the leader of the Sudan Liberation Army (SLA), Abdul Wahid Nur, into the peace process have so far failed."

"I urged the council to consider stern action against the SLA leader because from all accounts, he prefers belligerence and armed struggle to cessation of hostilities and a political process. It is highly unlikely that he would change this position any time soon," Mamabolo said.

A diplomat, who spoke on condition of anonymity after a close door consultations of the 15-member Security Council, said several countries had spoken of the need to impose sanctions on Nur.

Nur, who was born in the Jebel Marra but has long lived in exile in Paris, heads the Sudan Liberation Movement that has been battling President Omar al-Bashir's regime since 2003.

An insurgency began in Darfur in 2003, as ethnic rebels rose up against Sudan's government, accusing it of marginalizing them.

Khartoum responded by using militias to crack down on rebels and since then, insurgent groups have fragmented, with fighting punctuated by periods of relative calm.

The United Nations says that over the years the conflict has killed about 300,000 people and displaced more than 2.5 million, with many having set up home over the last decade and half in sprawling semi-permanent camps.

With the overall fall in violence in Darfur, a joint peacekeeping mission between the UN and the African Union, known as UNAMID, has been reducing its troops, which currently stand at about 8,700.

Plans are to cut them to 4,050 by June 2019, with mission itself terminated by the end of 2020, under pressure from the United States to cut back on expenses.