New office to advance relations with Reunion opens in Seychelles 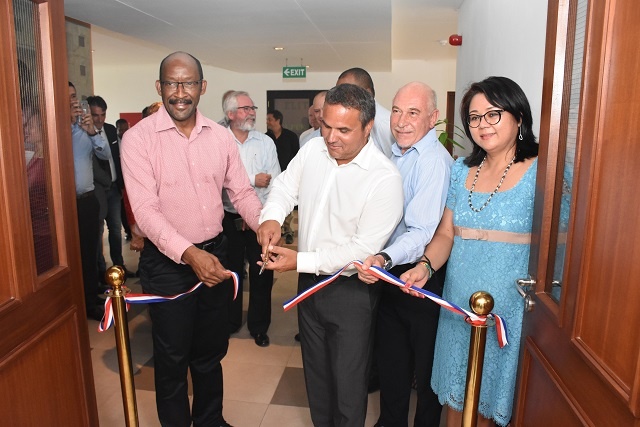 The office located at Espace Building was officially opened on Wednesday. (Louis Toussaint)

(Seychelles News Agency) - A new office representing the Regional Council of Reunion -- a French department in the Indian Ocean -- opened its doors in Seychelles on Wednesday.

The office is located on the third floor of the Espace building on the outskirts of the capital city, Victoria. Its main aim is to facilitate the connection between enterprises in Reunion and the authorities in Seychelles in the private or public sector.

Speaking at the inauguration ceremony, the president of the Regional Council of Reunion, Didier Robert, said that this is a historical moment and the office will allow the overseas French department to better build on its relationship with Seychelles.

“Already we have accomplished many things together such as the airline connectivity, giving training to professionals in the health sector, and promotion of tourism in the region through the cooperation between the Vanilla Islands,” said Robert.

The opening of the office follows the signing of an agreement in October last year aimed at making transactions with the European Union (EU) and Indian Ocean countries easier. The office in Seychelles is the fourth that provides the presence of Reunion in countries forming part of the Indian Ocean Commission (IOC).

On the subject of potential areas of cooperation, Robert said Reunion and Seychelles can work together to develop further clean and renewable energy.

“Perhaps what will be the most important thing for us in the few years to come for our islands are the question of authenticity and the question of biodiversity,” he said.

He added that “all these subjects can make the islands of the Indian Ocean a leading example in the area of preservation and protection of the biodiversity,” added Robert.

On his side, the Seychelles’ Vice President, Vincent Meriton, said, “My presence here today translates in the firm commitment of the government to partner in all regional projects developed in the mutual interest of our citizens.”

Meriton added that the common interest of a stable, democratic and prosperous Indian Ocean region as well the management of the Indian Ocean Commission are also subjects that bring the two islands closer.

The regional office in Seychelles will be managed by the Head of Mission, Thais About.

The French Ambassador to Seychelles, Lionel Majesté-Larrouy, said that the regional district of Reunion also needs the help of Seychelles as much as Seychelles needs its help.

Majesté-Larrouy also highlighted the importance of the European countries, especially France in the regional development.

The establishment of the office in Seychelles, a group of 115 islands in the western Indian Ocean, is part of the Interreg V Indian Ocean cooperation programme.