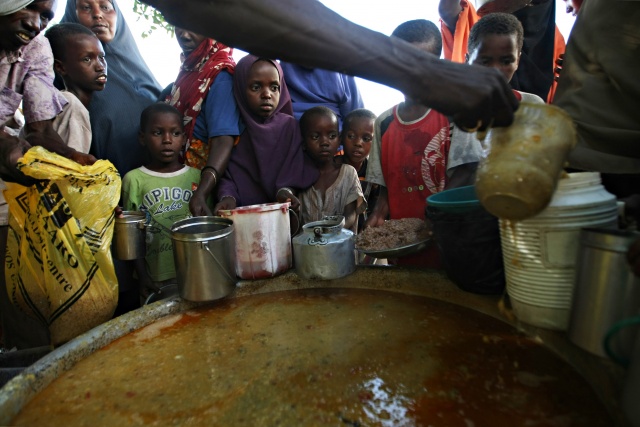 Internally displaced children line up to receive a food ration at a food distribution point at a voluntary centre in Mogadishu, Somalia on August 31, 2009. Persistent violence and a prolonged drought have plunged Somalia into its worst humanitarian crisis since civil war erupted two decades ago, with a third of its 10 million people needing relief aid, a UN report said last week. One in every five children is acutely malnourished, around 1.42 million have been displaced by violence and up to 3.76 million are in need of humanitarian assistance, said a study by the Security and Nutrition Analysis Unit for Somalia. (AFP PHOTO/Mohamed DAHIR)

(AFP) - A potent combination of hunger, climate change and man-made conflicts are creating a "perfect storm", the head of the UN's food arm warned Tuesday in a call to action on World Food Day.

"You've got a nightmare, the perfect storm heading your way," David Beasley, World Food Programme (WFP) chief, said in a speech in Rome, where the United Nations' food agencies are headquartered.

The UN aims to achieve a Zero Hunger world by 2030, but faces three obstacles: conflicts, climate change and an economic slowdown.

Beasley said the battle was an urgent one. "Children are dying at a rate of every five to ten seconds" from hunger or malnutrition, he said.

Food is being wasted both during the production process and in people's kitchens.

"The answer is not in Rome alone, it's in your homes. What are you going to do about it?" he asked.

It is not a problem wealthier countries can simply ignore, for it has a knock-on effect on them in terms of the migration crisis.

Some 821 million people, or one of every nine people on the planet, suffered from hunger last year, marking the third consecutive annual increase, according to the UN's latest hunger report.

An estimated 155 million children under five years old are chronically malnourished, according to the Food and Agriculture Organization (FAO), while micronutrient deficiencies, dubbed the "hidden hunger", affects over two billion people worldwide.

At the same time, over 600 million people are obese.

The costs to society of the "global pandemic" of obesity are enormous -- as expensive as armed conflicts and smoking, FAO head Jose Graziano da Silva said.

"International solidarity appears to be cooling," warned Pope Francis in a speech delivered by a Vatican representative.

He warned institutions leading the fight against hunger not to "study the roots of (poor people's) misery" and merely respond with "impressive publications destined only to enlarge library catalogues".

"When it is a question of effectively confronting the causes of hunger, grandiose declarations" are not enough, he said.

"The struggle against hunger urgently demands generous financing, the abolition of trade barriers and, above all, greater resilience in the face of climate change, economic crises and warfare."