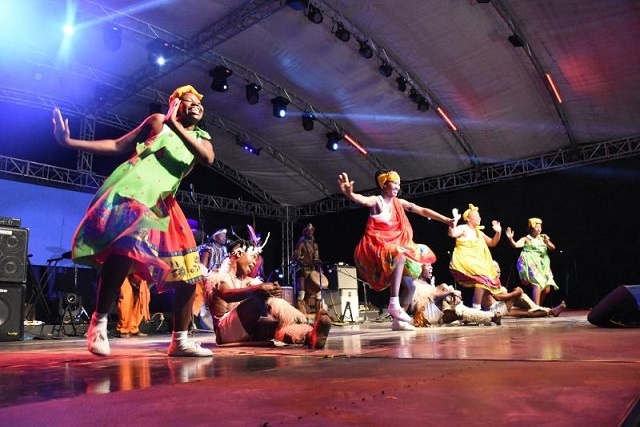 One of the Performances marking the opening of the 33rd edition of the Creole Festival. (Thomas Meriton)

(Seychelles News Agency) - The Creole Festival brings Seychellois together to revive the Creole spirit despite differences, said a top official at the opening of the festival on Friday.

The Designated Minister Macsuzy Mondon said, “The festival is also a moment to bring together every Creole-speaking country to celebrate together our cultural values.”

The official opening of this year’s 33rd edition of the Creole Festival took place in a ceremony at the International Conference Centre of Seychelles (ICCS) in Victoria, the capital.

The Creole Festival is an annual celebration of culture and tradition that takes place throughout the month of October.

Mondon said that this celebration is an important moment for the people to reflect on the nation and put an eye on the future.

“The Creole nation has been founded on a rich history. We have been able to turn the negative into positive. A typical example is that we have been able to transform our maternal language into a language that has a stature in its own right rich in expression,” she added.

The Designated Minister said that despite the political and social differences the people of Seychelles, an archipelago ion the western Indian Ocean, have remained united because they are proud of their identity.

“It is through peace, love, respect and tolerance that we keep on surmounting our problems. As one Creole-speaking country we should do all we can to protect our heritage and culture,” she said.

During the opening ceremony, an honorary award was presented to two local singers – Despilly William and Eric Denis. The award is in recognition of those who had contributed immensely to the preservation of Creole music

Speaking to SNA, William, he said that he is very proud to have received this award and he thanked God and his family for their support throughout.

“Young people entering this industry should take music seriously and should always look back to us if they want to preserve Creole culture and music,” William added.

William, a singer from La Digue, the third-most populated island, is known for his unique voice, but also for his entertaining dance moves which makes him a must-see performer.

The Creole festival brings a plethora of activities with the most prominent one — the Laserenad' [Serenade] — taking place on Saturday.

The event brought together participants ranging from children to the elderly citizens working together to showcase a chosen theme depicting and promoting the Creole culture. Around 20 floats, both local and international, took part.

A musical concert entitled ‘Respe’ Creole for respect will take place starting at 7 p.m. local time at the Freedom Square in the capital. International participants from more than 10 countries are expected to join in the performance alongside local artists.

The festivities will move out of the capital on Sunday with activities at the popular beach of Beau Vallon in the north of the main island of Mahe.

As is customary every year, other Creole nations including those from the Indian Ocean islands of Mauritius, Rodrigues and Reunion will also participate. India and China will also be represented.

As a way of bringing activities to different districts, two more Creole balls will be held on Wednesday, October 31 at the National Sports Council hall at Roche Caiman and one at the ICCS starting at 8 p.m.